Rikers Island Reform Could Target Use Of Force 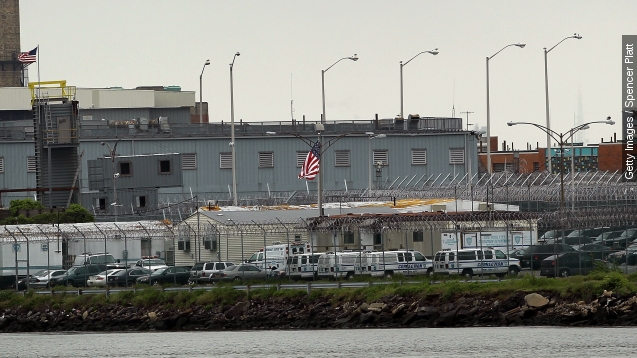 The New York Times reports negotiations over how to reform the prison complex are nearly over, and the agreed-upon reforms include new "use of force" rules, new security cameras, a federal monitor and an experiment in body cameras.

"We are fundamentally dissatisfied with a culture of violence and will not allow it to continue," Mayor Bill de Blasio said.

Rikers Island has a frankly terrible reputation for abuse, neglect and violence. Mayor Bill de Blasio has made reforming the prison complex one of his administration's top priorities.

There have been stories of abuse at Rikers for decades, but a series of highly-publicized cases have put the facility back in the headlines this year.

One of the more famous cases is the suicide death of Kalief Browder, a 22-year-old who spent three years in Rikers — most of it in solitary confinement — without ever being convicted of a crime. His mother says he was emotionally and psychologically wrecked by the experience. (Video via The New Yorker)

"It's not one person. It's a whole system that destroyed my son," Venida Browder told ABC.

In another case, two officers were arrested in the beating death of Ronald Spear, who prosecutors say was kicked in the head repeatedly by the guards, who are also accused of interfering with the investigation. (Video via Al Jazeera)

And most recently, on the day of The New York Times' report, former Rikers guard captain Terrence Pendergrass was sentenced to five years in prison for allowing the slow death of a mentally ill inmate who had swallowed a ball of soap.

Whether the reports of new reforms are correct, things are definitely changing at Rikers. De Blasio has committed to raising the hiring standards for new guards and to clearing the massive case backlog that has kept many inmates waiting years for a trial.