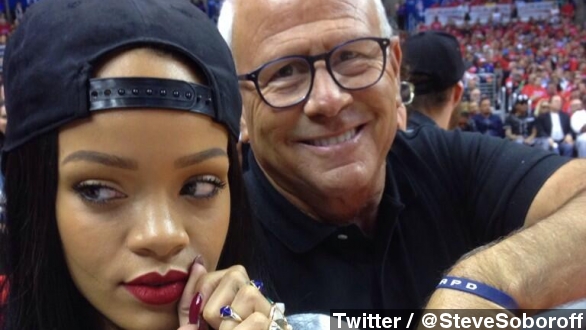 By Erik Shute
May 15, 2014
Rihanna takes one of the most expensive selfies ever, but she pays out to charity instead.
SHOW TRANSCRIPT

​Rihanna's slippery grip after a selfie leads to a busted phone, but thousands of dollars for charity. Here's how the story unfolded.

This past Saturday, RiRi parked it courtside for a playoff series game between the Los Angeles Clippers and Oklahoma City Thunder. "Good Morning America" says her seatmate happened to be LAPD Commission President — and likely huge fan — Steve Soboroff.

He seized the opportunity to pose for a quick selfie with the pop star and tweeted,​ "Thanks @rihanna for supporting @LAPDHQ" (Via Twitter / @SteveSoboroff)

According to TakePart, who spoke to Soboroff, he and the singer were posing with the LAPD's blue wristbands, which benefit the department's cadet program. The commission president admitted, "trying to pose and show the wristbands was tough."

And after the selfie — gravity intervened.

DIVINS: "When Rihanna tried to take their photo, she dropped his phone on the ground ... "

Sure, Rihanna could have just bought him a new one. No big deal.

But instead, she generously agreed to autograph Soboroff's busted device and let him sell it on eBay with all proceeds going toward LAPD's foundation. She wrote: "Sorry! I Heart LAPD." (Via Twitter / @SteveSoboroff)

​And it paid off, big time. More than 100 bids later, that completely broken smartphone is up for $60,000 and rising. As you can see from the page, the auction ends Thursday.

And Rihanna announced on Monday she would donate $25,000 out of her own famous pocket to the LAPD foundation. Can she "Take a Bow" yet? (Via Us Weekly)