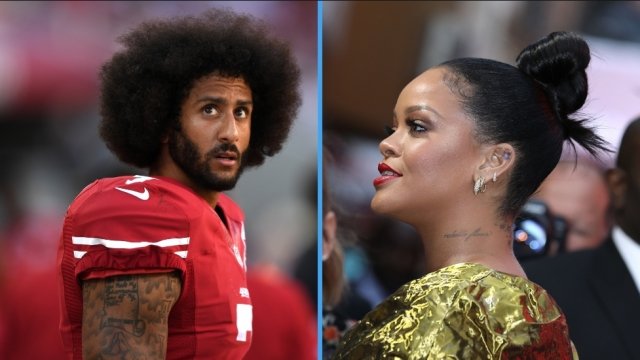 SMS
As A Nod To Kaepernick, Rihanna Reportedly Won't Perform At Super Bowl
By Melissa Prax
By Melissa Prax
October 19, 2018
Rihanna is said to have turned down an opportunity to perform at the 2019 Super Bowl in Atlanta.
SHOW TRANSCRIPT

The 2019 Super Bowl in Atlanta has yet to officially announce a half-time performer — but it likely won't be Rihanna. Us Weekly reports her reason for turning the offer down is because she wants to support Colin Kaepernick.

Kaepernick is a former San Francisco 49ers quarterback who knelt when the national anthem played before NFL games. It was a move to peacefully protest the systemic oppression of racial minorities, including police brutality.

But his act of kneeling quickly became a controversial issue, garnering criticism from some, including President Donald Trump, as being anti-patriotic or against American troops. Keep in mind a U.S. Army veteran initially suggested Kaepernick kneel. 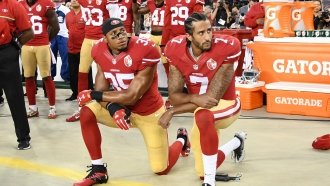 Kaepernick hasn't been signed to an NFL team since 2016. There's also an ongoing collusion case Kaepernick filed against the NFL.

As for Rihanna, she has yet to confirm her reason, but if it's because of Kaepernick, she joins a list of other performers and musicians that have used their platforms to show their support or distaste.

For example, Ted Nugent posted on social media urging NFL players who kneel to "take a little trip to Valley Forge in January" and that "there's a lot of places to take a knee. Real Americans have given their lives all over the world."

And Stevie Wonder knelt on both knees "for America" during a concert in solidarity with Kaepernick.

So far, turning down a performance has been a less common way to show support toward Kaepernick.

But that's what Jay-Z also reportedly did when asked to perform at the 2018 Super Bowl. That speculation seemed to be confirmed in Jay-Z and Beyoncé's collaborative album.

Lyrics to the 2018 song "APESHIT" read: "I said no to the Super Bowl. You need me, I don't need you. Every night we in the end zone. Tell the NFL we in stadiums too."

So far several outlets have cited sources that say Maroon 5 will perform at the 2019 Super Bowl.