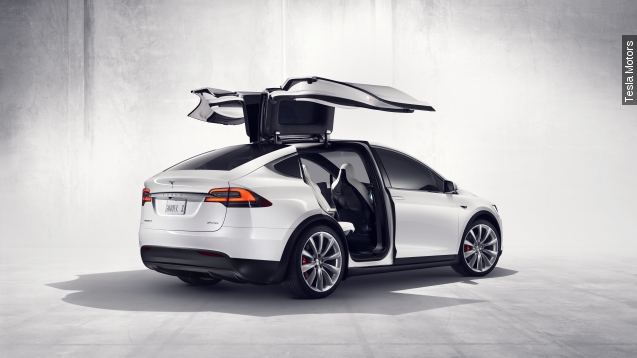 SMS
Ridiculous Tesla Model X Price Matches Ludicrous Features
By Leah Becerra
By Leah Becerra
November 24, 2015
The crossover's features are why the reported price of the base model is $80,000, but for some customers, the cost is still worth it.
SHOW TRANSCRIPT

Would-be buyers, those who've been on the waitlist for some time now, found out the cost Monday. Now those shoppers can choose between the least expensive 70D, the 90D and the most powerful P90D, though none will ship until mid-2016. (Video via CNET)

"We took it down the straightaway with Ludicrous mode on — 0 to 60 (mph) in 3.2 seconds — and it has that same glue-you-to-the-back-of-your-seat feeling that the Model S gives you. It's pretty wild," said The Verge's Chris Ziegler.

Ludicrous mode is only available on the most expensive P90D version, though. The P is for performance mode. The 90 refers to the battery, which is 90kWh. And the D is for dual-motor setup. This package will run something like $142,000. (Video via Jalopnik)

Each Model X will be all-wheel drive, feature falcon-wing doors, a panoramic windshield and have a detection system that can automatically apply the brakes if needed. Oh, and an excessive air-filtration system.

"If there's ever sort of a apocalyptic scenario of some kind — hypothetically — you just press the Bioweapon Defense Mode button. ... This is a real button," says Tesla CEO Elon Musk.

Yes, it really is a real button. And it really will come standard on all the Model X crossovers. Which sounds ridiculous, but the car as a whole is a bit ridiculous, and awesome, and, as we noted before, expensive. (Video via Wired)

For now, use of Tesla's Model X online configurator — which lets potential buyers select color and other options — is still available only to those with an invite from the company.