Rick Perry Orders A Review Of The US Power Grid 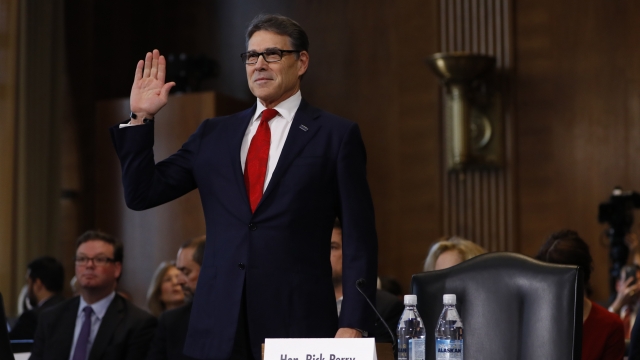 SMS
Rick Perry Orders A Review Of The US Power Grid
By Ethan Weston
By Ethan Weston
April 17, 2017
Energy Secretary Rick Perry is worried about how the previous administration's energy policies affect the U.S.
SHOW TRANSCRIPT

Energy Secretary Rick Perry wants his department to do a review of the country's power grid with a focus on whether federal support for renewable energy might be bad for the country.

In a memo made public Monday, Perry worries the previous administration's energy policies have undercut the U.S. power grid's supply of typical baseload power providers such as coal, natural gas or nuclear energy.

President Donald Trump has removed some of those Obama-era policies already and has stated several times he wants to renew the coal industry.

In the memo, the energy secretary says the U.S. is blessed to have an "abundance of domestic energy resources, such as coal, natural gas, nuclear, and hydroelectric." Solar and wind energy are conspicuously absent from the list.

Perry said he got the idea for a re-examination of the power grid from the most recent G7 meeting. The secretary said the meeting "impressed upon me that the United States should take heed of the policy choices our allies have made, and take stock of their consequences," and that it made him recognize a need for more fuel diversity.

Perry has ordered his chief of staff to assess the threat that policies, subsidies and regulations promoting renewable energy might pose to our energy grid's reliablity.

Critics of solar and wind energy say renewable energy doesn't provide power when the sun's not out or the wind's not blowing, making for a less reliable grid.

But the Department of Energy recently published an article about how a solar energy plant in Nevada is able to reliably provide energy to around 75,000 homes day and night.

And a 2014 study of Germany's power grid found that it actually became more reliable after adding wind and solar energy sources.

The worry was that Germany's grid would become unreliable and erratic since it relied on multiple inconsistent energy supplies. But the study found that the average German consumer didn't notice fluctuations in service.

There is a downside: All that switching means consumers in Germany have higher electricity prices than almost anyone else in the EU.