Richard Painter: Justice Thomas Should Have Recused Himself 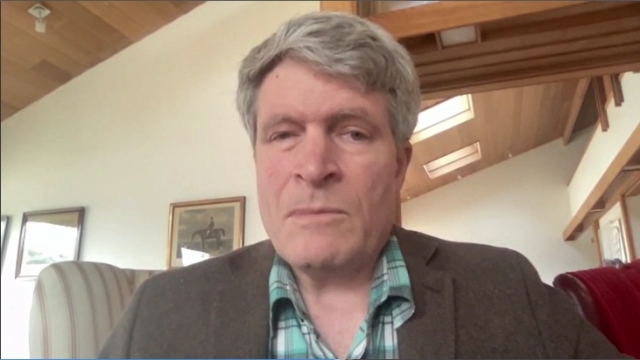 NEWSY'S CHANCE SEALES: In the current case with Justice Thomas, can you help us suss out material benefit? You have waded into these ethical issues for your whole career. I guess we really have to assume Justice Thomas knew that the texts existed between his wife and Mark Meadows and that reputational harm probably isn't an issue. She was doing this work well before she met Justice Thomas. She's public about it, so she would be getting what, a legal benefit for him not recusing himself? Is there legal peril for texting Mark Meadows? Your opinions?

RICHARD PAINTER: We aren't sure what legal exposure Ginni Thomas might have in this situation, with respect to the rallies on January 6 — the predominant one, which did turn violent and became an insurrection. What we do know, and what Justice Thomas almost certainly knew, is that was that his wife was actively involved in the efforts to overturn the 2020 election. And in light of that, Justice Thomas should have recused from all cases before the United States Supreme Court, including cert petitions involving the 2020 election, given the role that his wife is playing in seeking to overturn the results of that election. ... The fact that she was involved in that effort to that degree, particularly a degree where she is texting the White House Chief of Staff, he would need to recuse from all those cases, and he should have recused from all the 2020 election cases that came before the court. Second, if there are any cases in the future involving the insurrection of January 6, he must recuse from those cases, whether or not his wife could be implicated.

SEALES: Help us understand if you would, Richard, how far the Supreme Court spousal recusal issue goes. Like for instance, if, let's say, my wife is a public school teacher, and a school voucher case comes before the court. You know, she would have job security on the line, enrollment on the line, maybe a paycheck on the line, would I need to recuse?

PAINTER: I would say probably not, in that case. Now, if it were a voucher program in a particular district that was being reviewed and she worked in that district, we might get in the way a closer situation, a closer call. Not all of these cases are easy with respect to recusal. But some are clear. And I believe the recusal required of Justice Thomas that I just outlined are very, very clear under these circumstances that they would be required.

PAINTER: We'll see what happens here. We'll see what the facts are. And we'll see if there is a case which is presented to the Supreme Court involving the January 6 Insurrection. So far, most of the cases involve discovery and the ability of the January 6 Committee to obtain documents from the Trump White House. The court already weighed in on that and Justice Thomas participated in that, so he's getting very close to the line here. The next round of cases could involve criminal prosecutions of individuals who organized these rallies, particularly such individuals who encouraged participants of the rallies to engage in violent or insurrectionist combat — the people prosecuted, including everyone from the former president of the United States to perhaps his chief of staff, or others organizing these rallies. ... But, if she is at all close to this particular matter, that becomes a criminal case, that ends up in front of the U.S. Supreme Court — or any other case, including additional subpoenas that need to be enforced — Justice Thomas absolutely has to recuse. If he refuses to recuse in situations where it's abundantly obvious he needs to recuse, that's where the Judiciary Committee can step in and start to hold hearings with an eye to impeachment. And usually, that is resolved without going through impeachment of a justice.

SEALES: You've been in the ethics world for a long, long time, but suddenly a lot of people are realizing that recusal is messy, messy business. Richard Painter. Thank you.

PAINTER: Thank you very much.