Another Head Of A Financial Watchdog Agency Resigns Ahead Of Schedule 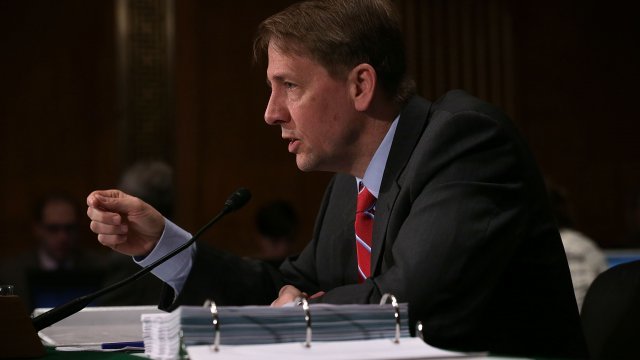 Many suspect Richard Cordray decided to leave his post early to run for Ohio governor next year.

The financial watchdog agency was created in response to the 2008 financial crisis. It's responsible for protecting consumers "from unfair, deceptive, or abusive practices ... against companies who break the law."

An Obama appointee, Cordray has developed a reputation for being tough on financial institutions — and frequently upsetting Republicans who want less banking regulations.

Last year, the agency ordered Wells Fargo to pay $185 million in fines and penalties for creating fake credit card accounts. One of those fines was the largest the CFPB has ever given.

But things are changing under the Trump administration. Last month, the Senate voted to block a CFPB rule that made it easier for the public to sue banks and credit card companies, in spite of Cordray's appeals to President Donald Trump.

Trump's State Department Has Quite A Few Positions Left To Fill

Trump also replaced the head of the Securities and Exchange Commission with a Wall Street lawyer. One study found that in this fiscal year, the agency has given out the lowest number of penalties in four years.

And the leader of the Office of Financial Research, another financial watchdog agency created under Obama, also resigned ahead of schedule earlier this month, leaving another opening for Trump to fill.

Cordray plans to leave at the end of this month but didn't say why he picked that date. His term is set to expire next summer. Cordray is rumored to be eyeing a shot at the Ohio governor's race next year.