Rice's Suspension Could Impact Others Accused Of Abuse 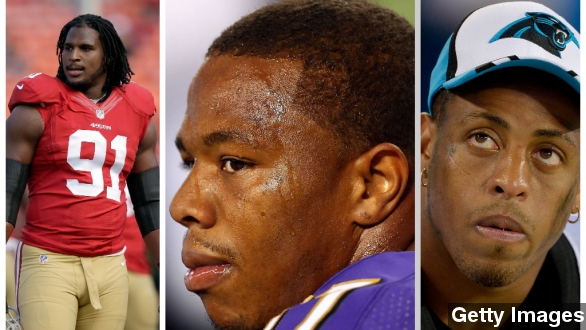 SMS
Rice's Suspension Could Impact Others Accused Of Abuse

By Jamal Andress
September 10, 2014
Ray Rice's suspension from the NFL has led many to wonder out loud what might happen to other players facing similar charges.
SHOW TRANSCRIPT

The huge and seemingly never-ending fallout surrounding the Ray Rice domestic abuse video has led many to wonder out loud what might happen to others in the NFL who face domestic abuse charges.

NBC: "The NFL has this problem. We talked about all the other cases. Greg Hardy, defensive end for the Carolina Panthers, continues to play. He was convicted."

Ray Rice was originally suspended by the NFL for two games after a video surfaced of Rice dragging his unconscious then-fiancee Janay Rice out of an elevator.

But when a video surfaced Monday of what actually happened in that elevator the sports world and the general public immediately erupted and the punishments for Rice came down just as quickly.

Within hours, Rice was released from his contract with the Ravens, suspended by the NFL and dropped from the Nike brand.

WMAR: "It's something we saw for the first time today you know all of us and it changed things of course."

But these incidents don't always come with a video or audio tape and now that Ray Rice has been punished for his actions, many are calling for the NFL to revisit the cases of other NFL players accused of abuse.

First on the list is Greg Hardy, a defensive end for the Carolina Panthers who was convicted of assaulting his girlfriend back in July.

CNN: "Threw her on the floor, threatened to kill her. Picked her up again, moved her over to the living where he had a couch with guns ... Threw her onto the couch on top of the guns."

But Hardy is on the roster to play this Sunday because he has appealed the verdict.

Also the San Francisco 49ers D-lineman Ray McDonald who was arrested on domestic abuse charges August 31. He has not been convicted.

The San Jose Mercury News quotes the police as saying, "the domestic violence allegation was substantiated" and McDonald's fiancee had bruises on her neck and arms.

But McDonald also played in his season opener, and there is no plan to keep him from playing this week. Team owner Jed York said he wants to let the legal process play out.

KOFY: "I think every instance is very different and it needs to be looked at differently. Everybody deserves the right to due process and that's what we've stood by."

So why the discrepancy? Well, sports commentator Dan Patrick says the video makes all the difference.

"I see it therefore now it is far worse. ... As opposed to Greg Hardy in Carolina or Ray McDonald or anybody else in any other sport or society. You see it so it's different."

As it stands, McDonald is set to appear in court September 15 but Greg Hardy's appeal process is supposed to take much longer with no court date scheduled until 2015. That would allow Hardy to finish out the entire 2015 season.