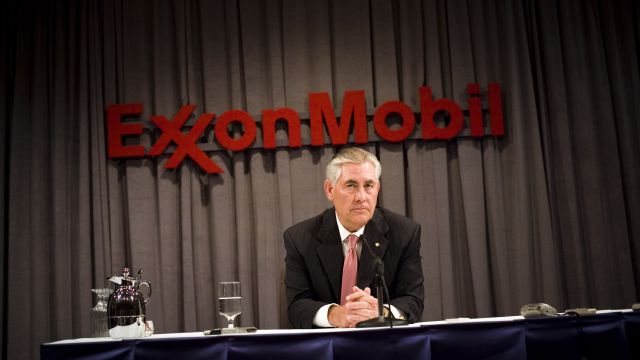 When U.S. Secretary of State Rex Tillerson was chairman and CEO of Exxon Mobil, he may have used an alias email account to discuss issues related to climate change.

Schneiderman accuses Tillerson of using the account to communicate with other company execs from at least 2008 to 2015. Exxon confirmed to Bloomberg that it was a valid company email address Tillerson used.

Schneiderman discovered the account during an investigation he's leading into Exxon Mobil.

Secretary of State Rex Tillerson has recused himself from anything related to the Keystone XL oil pipeline.

His office is trying to figure out if the company misled investors by arguing against the existence of climate change, even though, according to email evidence, its executives knew the science behind it was right.

As part of that investigation, Schneiderman subpoenaed the company for internal documents and communications. And in those documents, he says he found the email account for Wayne Tracker.

Schneiderman's office claims Exxon Mobil omitted emails from the alias account when it turned over millions of documents in a subpoena request. Now, he's asking a judge to make the company comply.

Exxon Mobil said it will respond to the accusations in court.