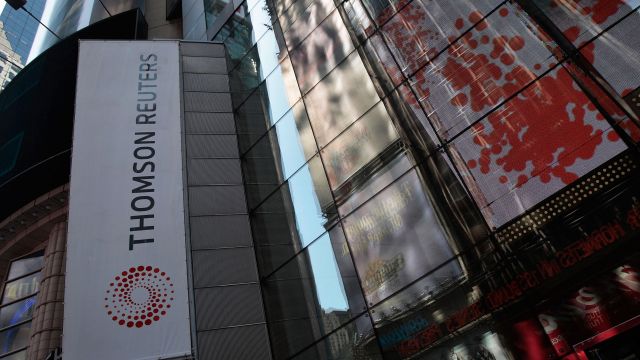 SMS
Reuters Will Cut Jobs And Add Cash To Streamline Its Business Side
By Matt Picht
By Matt Picht
November 1, 2016
Thomson Reuters is cutting 2,000 jobs from its business and enterprise operations.
SHOW TRANSCRIPT

Media giant Thomson Reuters is cutting 2,000 jobs and setting aside at least $200 million to restructure its business.

Reuters employs about 48,000 staff around the world. The latest round of cuts represent about 4 percent of the company's total workforce.

The company says it's not planning to fire newsroom staff. Most of the cuts are slated to come from its financial and risk division, as well as the enterprise, technology and operations unit.

Those sectors are also where most of the $200 million will be spent. Reuters says it's planning to accelerate its efforts to streamline the business side of the company.

Company president Jim Smith said the company is stepping up its restructuring to take advantage of some favorable conditions. He said, "Our core subscription businesses are moving in the right direction, our cost controls are working and we are increasingly confident in our execution capability. That is why we are going to pick up the pace of our transformation efforts.”

Reuters said it brought in $286 million in net earnings over the past quarter. That's less than it made this time last year, but a bit more than analysts expected it to make.

Revenue remained flat compared to last year at about $2.74 billion, which was in line with expectations. The company said it expects single-digit revenue growth of around 2 to 3 percent for the full year.

On the news of the restructuring, Reuters' stock jumped about 4 percent, to about $41 per share.