Press Freedom Is Still On Trial In Myanmar 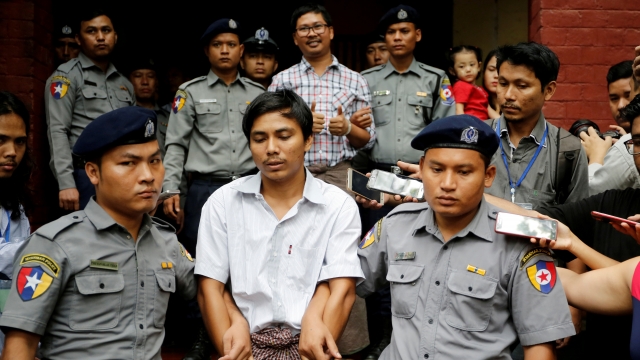 SMS
Press Freedom Is Still On Trial In Myanmar
By Matt Picht
By Matt Picht
April 8, 2019
Reuters journalists Wa Lone and Kyaw Soe Oo are still in prison in Myanmar after they reported on a mass killing of Rohingya Muslims in the country.
SHOW TRANSCRIPT

In Dec. 2017, Reuters journalists Wa Lone and Kyaw Soe Oo were arrested by Myanmar police. The reporters were in the middle of filing an investigation which implicated the country's military in a mass killing of Rohingya Muslims. They've now been held in prison for over 480 days.

The two reporters were covering a massacre at Inn Din village in Myanmar's Rakhine state: 10 villagers executed and buried in a mass grave, reportedly with the military's involvement. They gathered testimony from witnesses, families of the victims — and even some of the alleged perpetrators.

But before they could publish their work, Wa Lone and Kyaw Soe Oo were arrested and accused of possessing state secrets, charges which could carry seven years in prison. Their case is currently in its final appeal in front of Myanmar's Supreme Court.

Newsy spoke with Reuters' Myanmar bureau chief Antoni Slodkowski about the process of reporting the story, and how the journalists had fared since their arrest.