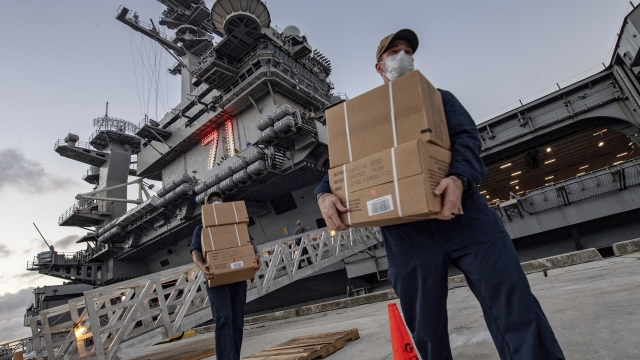 The five sailors were allowed back on the ship after all originally going through two weeks of quarantine and testing negative for the virus.

Five sailors from the USS Theodore Roosevelt have tested positive for the coronavirus after returning to the ship from quarantine.

The sailors have been removed again from the pandemic-stricken ship. The Navy said in a statement that 18 people who came into contact with the five have also been quarantined.

The Associated Press reported that the five sailors earlier had tested positive for COVID-19 and were put in quarantine for two weeks. They were allowed back on the ship after testing negative for the virus two separate times but later developed flu-like symptoms. A major outbreak on the aircraft carrier has resulted in more than 1,000 COVID-19 cases to date.

The Roosevelt has been docked in Guam since late March after the outbreak began. The ship gained notoriety after Capt. Brett Crozier was relieved of duty for speaking out about the situation on board. The Navy secretary who ousted him would later resign.

The AP reported, as of Friday, 4,000 out of the 4,800 crew members have been removed from the ship since docking for quarantining purposes. 2,900 have since reboarded.