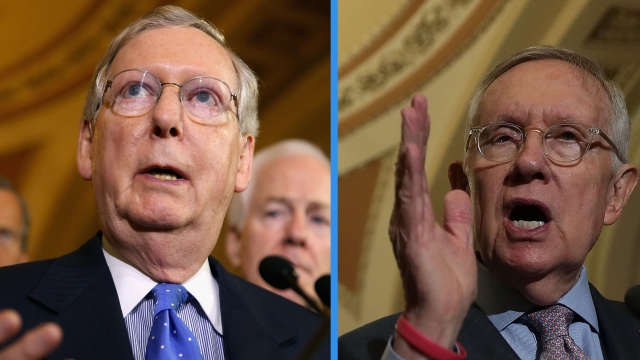 Sen. Harry Reid is retiring next year. And his farewell gave us the opportunity to witness something we rarely see in Congress anymore: cross-party civility.

"We're friends. Everyone, I know you don't like this story, but Mitch McConnell and I are friends," Reid said during his portrait unveiling ceremony.

The Senate Democratic leader noted he's built up a rapport with his Republican counterpart, Sen. Mitch McConnell, over the decades they've spent in the Senate together.

It's a relationship we don't often get to see, for professional reasons.

"I have never seen anything more craven than Mitch McConnell and what he's done to our democracy," Reid said during the Democratic National Convention.

McConnell, in turn, blasted Reid for changing the Senate's rules on filibusters in 2013, telling Politico, "I think he did a lot of damage to the institution and further soured relations."

Things can sometimes get personal: A closed-door legislative meeting between Reid and McConnell in 2015 ended with Reid storming off in a huff. It lead to a period of protracted partisan sniping in the Senate.

But now that Reid's on his way out, the senators can afford to show a little more civility.

SEE MORE: After All That, Nancy Pelosi Will Remain House Minority Leader

"If there's one thing we know about Harry, it's that he doesn't give up easily," McConnell said.