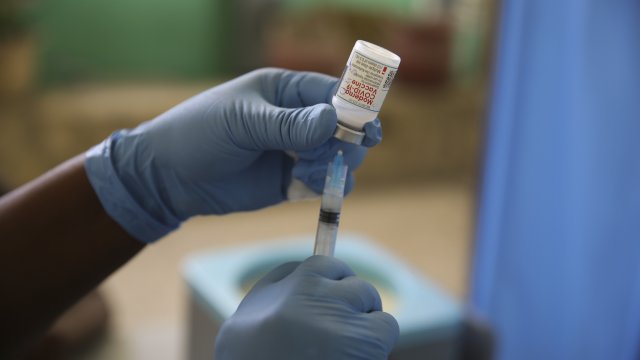 Colonel — 12,000 holdout right now in the Air Force. Is that a protest or is that insubordination?"

COLONEL MORRIS DAVIS: "I think it's a little bit of both. I think certainly, I think some folks that have legitimate concerns and hopefully this can be addressed. But I think for others, unfortunately, this pandemic's become more about politics then public health."

SEALES: "Are they going to be able to bulldoze the defense secretary?"

COLONEL: "I doubt it. We went through something similar when I was on active duty during the first Iraq war with the anthrax vaccine. We had a number of members said that were concerned, refused to take it. Quite a few are separated from the service. I think at some point in this it's about readiness, and you don't get to pick and choose. I don't remember getting sent to the clinic with my shot record and told to just pick the ones I like and skip the rest. It's about readiness."

SEALES: "Okay. So it's not a buffet like you're eating everything that comes on the plate. That analogy – You said the Gulf War syndrome. I know some people worried about that being connected to the anthrax vaccine. I have to tell you the truth. This never caught my attention 20 years ago when it was being discussed heavily in the media. What happened with that?"

COLONEL: "Well, at the Air Force base at the time we had a couple of pilots and some others refusing to get the shot. They were counseled, they were provided to access to medical professionals to answer questions they had. At the end of the day, with the exception of one or two, they all got the shot. Ones that didn't faced disciplinary action. We didn't have any court marshals there, but other locations, folks were court-martialed for refusing an order to take the vaccine. That inoculation goes back to George Washington and the Continental Army back in 1777, so this isn't new concept. You don't get to pick and choose. I mean when you get an order to charge the hill and you can't say, gee, that might be bad for my heath, I don't want to do it. This is comparable. You don't get to pick and choose for readiness to make sure that you're able do your job and you're not going to take out your fellow troops exposing them."

COLONEL: "It's an option. It's a very, very remote possibility. A court martial is really the last option – a criminal prosecution – unless someone is like a leading the effort to try to get others to stage an insurrection and refuse the order. I can't imagine that happening. I think more likely it will be lesser forms of disciplinary action, potentially administrative separation without a court martial punishment."

SEALES: "If there's someone with extremely specialized skills in, let's say in the Air Force. Would an exception be a consideration?"

COLONEL: I seriously doubt it because you're setting a precedent. You know, word spreads. And if you make an exception for one person, then you have a hard not making one for another. I don't think there's any one of the military is indispensable. So, I don't think it matters how special your skills are. If you're impacting good order and discipline then you're in the wrong business."

SEALES: "Put this in perspective for me, if you would, Colonel  – 96% of active-duty airmen are vaccinated, but Reservists and National Guard dragged that down to 68% military wide. According to Washington Post, 96% in the Air Force – that ain't nothing."

COLONEL: "You know, that's a good number. I haven’t seen the numbers for the other services. The Air Force is just by the nature of the mission, tends to be more educated and more technical service than some of the others, like the Army and the Marines are ground pounders. Again, it's a problem with our reserve and guard forces. They are in uniform, you know, seven days a week, they're probably a little harder to corral than the active-duty folks."

SEALES: "Retired Col. Morris Davis, thank you so much. Thank you."