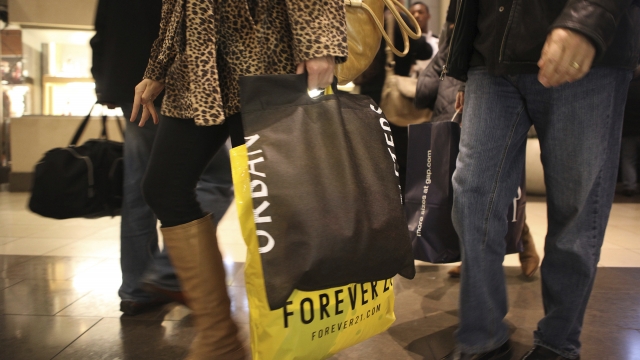 Retailers are trying to get rid of inventory that has piled up during the pandemic, all as shoppers reduce spending.

This year's holiday discounts and bargains are rolling out well in advance of the normal Christmas shopping season.

"Black Friday traditionally used to mean the Friday after Thanksgiving over the last several years, and this was even before the pandemic," said Anna Rathbun, chief investment officer at CBIZ Investment Advisory Services. "It kept creeping earlier and earlier. You might as well have called it Black November, and now we should be calling it Black October."

The blame could fall on retailers like Amazon, Walmart and Target scrambling to sell off inventory that has piled up as shoppers tighten their budgets.

"This really began in 2021," Rathbun said. "If you think back to what we were dealing with at that time, we had supply chain issues where a lot of retailers were not getting their stuff when they needed it in order to be able to sell it to you."

They were banking on big spending post-pandemic.

"If you think about it from a psychological perspective, you have retailers who are saying, 'I need to get as much stuff as I can so that when I have an opportunity to sell it, when a consumer is looking for it, I can make money.'"

But inflation and concerns about a recession got in the way.

"2022 came, and then we realized that people weren't willing to spend as much money, partly because gas prices are up, food prices are up," Rathbun said. "We're all experiencing this in our wallets, right? So they are now finding themselves with a lot of inventory. If Amazon is having a second Prime Day in a year, in a few months since July, that tells you something."

The Washington Post reports that as of July, retailers are sitting on a record $732 billion worth of inventory.

"When you have a lot of inventory you need to get rid of, the big question mark is: What's the right price?" Rathbun said. "Starting earlier gives them more time to get the price right for the holiday season."

Some shoppers are already buying into the discounted prices.

"I used to tell my kids — they are in their 30s now — I used to tell them, 'Oh Santa's late,' and go get something the day after Christmas because it's at least half off," shopper Sarita Lamar said.

However, experts warn against waiting too long to take advantage of these sales.

"I wouldn't recommend waiting until the last minute to be holiday shopping because you never know, and that's true on the consumer end too," Rathbun said. "You don't know how quickly these things are going to fly out."

As for retailers, experts say this year they could learn something.

"In terms of lessons learned, perhaps it's that you maybe shouldn't be too confident about what you think consumers might want and order too much of it," Rathbun said. "Maybe hoarding isn't a good idea, and that might be the lesson."