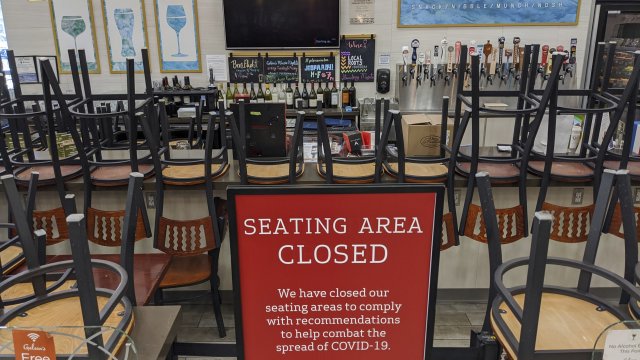 The pain of restaurant owners during the pandemic has been well documented. As restaurant closures go up, there are fears the recovery will be slow.

Marcus Ward took a leap of faith and opened up Urban Grill in Chicago---something he's always wanted to do.

"My wife thought I was crazy," he said. "We [had] never open[ed] a restaurant. I barely ever cook at home."

His restaurant’s location relied on business from a nearby local college. While location is important, so is timing. They opened in January, built momentum in February, and then...

"I think like the end of February, beginning of March is when the pandemic struck and was it was tough," Ward explained. "I think it's a learning experience for both my wife and I, running an operation of a restaurant. I'm not saying we're perfect, but we strive to be perfect.

Urban Grill has been able to get by on to-go orders and Ward's personal savings. While his restaurant is still young, even the established ones are hurting.

"16 percent of restaurants that have closed so far been in existence for 30 years serving their communities," said Sean Kennedy, Executive Vice President of Public Affairs for the National Restaurant Association.

Kennedy says ordering takeout from your local restaurants helps. But it's not enough and these businesses need help from Congress.

"48% of restaurant operators who have shut down their restaurant tell us that they are unlikely to come back into the industry in any form. So we are really at risk of losing a generation of people who have provided so much creativity and spark to the restaurant industry."

As the number of COVID cases goes up...so have the number of restaurant closures. That total is at 110,000...and counting... according to the association. Even when business picks up, Kennedy warns the recovery could be slow.

"I think the big challenge is, again, going to be advising folks that restaurants are taking the safest protocols they can, that we want to ensure that our customers and our guests and our employees are safe, and that now once we get on the other side, that it's about time that folks start dining out again"

That uncertainty is stressful for an industry used to running on tight margins. Places like Urban Grill hope state and local officials will reconsider their restrictions...since there is no guarantee the restaurant will stay open past the winter winter.

"To be honest with you, I couldn't 100 percent tell you that we will survive because it's a day to day, week to week, month to month," Ward said. "What are we going to pay? Who's going to allow us to to to pay a little bit less and not the full amount? So it's like...we just got to stay positive."