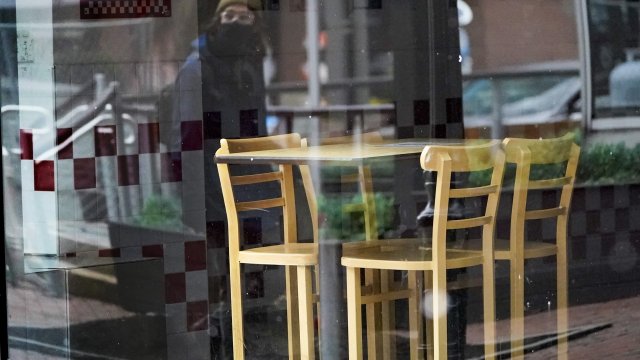 Restaurants are still reeling in the midst of COVID-19. Though the vaccine rollout is in effect, it's not happening fast enough to rescue the industry's workforce.

"It's baked into our mentality to be worried about what's next just because this virus has taken so many different turns," said Andrew Gruel.

Andrew Gruel is the founder of Slapfish Seafood in Huntington Beach, California. Last year, he created a fundraiser for unemployed workers. This year, he's in the process of turning it into a nonprofit.

"The demand has far outstripped the supply," Gruel said.

The latest monthly jobs report shows any job gains made were offset by losses in restaurants and other industries. In fact, restaurant jobs are still 2.5 million below their pre-coronavirus level. The bipartisan Restaurants Act — which would create a $120 billion fund for food service businesses — was reintroduced this month. One expert says it could make a real difference, at least temporarily.

"There's probably going to be more assistance that's going to be needed if we're going to keep this industry on top," said Sean Kennedy, executive vice president of public affairs at the National Restaurant Association.

Major cities from New York to Los Angeles are allowing restaurants to reopen at limited capacities. But even as they near a full return to operation, the pandemic could leave lasting changes.

"We introduced delivery at a lot of locations. To-go supplies [and] costs have gone up, obviously, because you're doing a lot more packaged goods to go," said John Metz, executive chef and co-founder of Sterling Hospitality.

The future of restaurants might mean a bigger investment in takeout and delivery — spelling an uncertain future for workers and the tipped wage. It would also put a bigger spotlight on food delivery apps, like Postmates and DoorDash, accused of taking profits from restaurants. Despite the challenges ahead, John Metz says the obstacles of the past year made his business more efficient, and he's cautiously optimistic.

"Without compromising our hospitality or service or quality, we really cut as much as we could behind the scenes to save money at every point along the way. And we did that pretty efficiently and effectively, as quickly as we possibly could," Metz said.