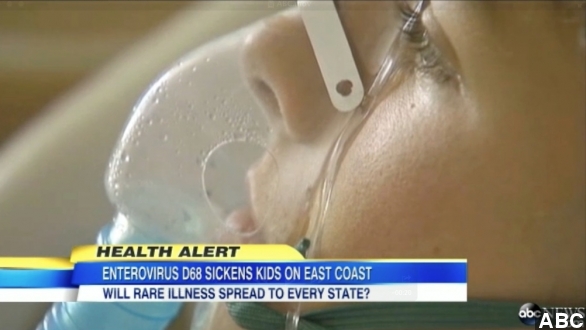 By Jay Strubberg
September 14, 2014
The respiratory virus Enterovirus D68, which targets children, has spread from the Midwest to 21 states.
SHOW TRANSCRIPT

The rare virus that was first reported in the Midwest and has been suspected of infecting children across the country with severe respiratory illness is now migrating to the Northeast.

The respiratory virus known as Enterovirus D68 that experts say typically pops up around back-to-school time has spread to both New York and Connecticut.

The virus continues to make its rounds. In total, ABC says at least 21 states have reported cases of Enterovirus D68 and health experts caution that it's on the move and could potentially hit every U.S. state.

This marks the first mass outbreak on record for the virus. It typically affects young children with asthma and other breathing problems.

CNN health correspondent Jacque Wilson says there are many different kinds of enteroviruses — such as some common colds. But D68 is a different breed that's more severe. She points to one of the larger outbreaks at Mercy Hospital in Kansas City, MO.

They've had more than 400 children in the hospital with signs of this virus. 60 of those children have ended up in intensive care. And here's the important part. That's been in less than a month."

According to the CDC's website, some mild symptoms of enterovirus D68 to be on the lookout for include: "fever, runny nose, sneezing, cough, and body and muscle aches." And Dr. Richard Besser told ABC some cases are treatable.

ABC: "What can you do if you believe your child has this?"
DR. RICHARD BESSER: "Well, you want to get them some help. There's some medicine that they can give your child that will open up those airways and help the breathing. It's the same medicine for children who have asthma."

And, despite the scare, one health expert told Fox News the virus is typically not life threatening.

FOX NEWS: "Most of the time, this Enterovirus 68 is mild. It's only when kid has underlying asthma or a tendency for breathing problems. In very young kids, you want to act fast."

As a quick refresher, some preventative measures for Enterovirus D68 include: washing your hands, avoiding touching your face and disinfecting any dirty surfaces you may come in contact with. It also worth noting the CDC says — for as large as the outbreak is — this virus is seasonal so it's likely to go away by winter.