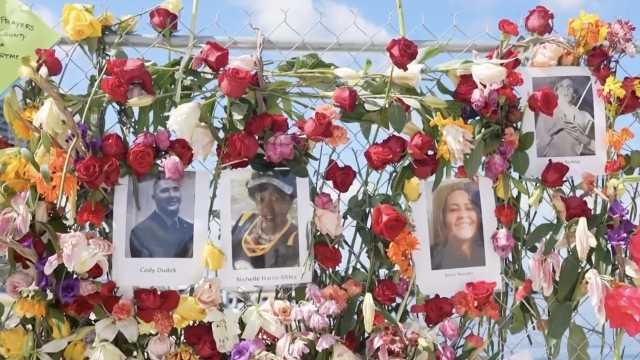 The death toll for hurricane Ian is now over 100. Some residents have now created a memorial for victims.

It’s been a week now since Hurricane Ian tore through tight knit communities throughout parts of Florida.

Although Ian has now dissipated, we're learning the death toll in Florida alone is now over 100 people. Some of those lives lost have been memorialized at Centennial Park in downtown Fort Myers.

"Just looking at all the places you used to go to, and they’re all gone. People are gone," said Gabrielle, a Cape Coral resident.

Gabrielle  moved to Cape Coral 30 years ago. She got emotional talking about her beloved community.

"Just the devastation — all the places that we used to go to are gone. They’re all gone — they’re somewhere out there in the river or the Gulf," said Gabrielle.

Gabrielle wasn’t the only one to tear up looking through the pictures at the wall. Kayla Silva, who lives in Fort Myers, says she worked at a gym where two of the victims worked out.

"For me this is hard. I don’t personally know them but I know them enough to know they were good people. There’s a lot of people out there grieving right now. This is really hard times for everyone," said Silva.

Many now are hoping this is a once in a lifetime event.

Florida officials have warned people to be wary of fake charity funds spread through social media.