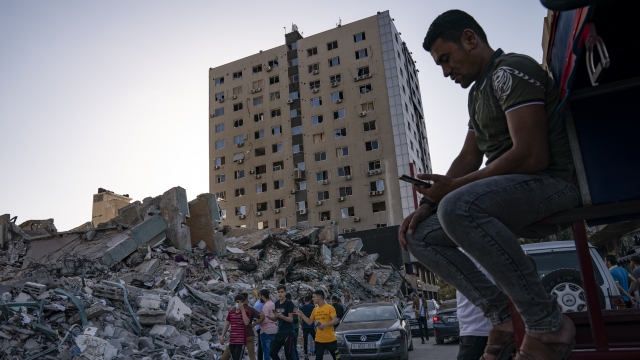 SMS
Residents In Israel And Gaza Survey Damage Following Cease-fire
By Meg Hilling
By Meg Hilling
May 21, 2021
Many residents throughout Israel and the Gaza Strip say they are worried about what comes next following Friday's cease-fire.
SHOW TRANSCRIPT

As the bombings stop and the smoke clears, a new reality is settling in across Israel and the Gaza Strip.

Following more than 10 days of conflict, Israel and Hamas, a Palestinian militant political group, have reached a cease-fire.

Across the region, Newsy spoke with residents as they surveyed their damaged homes and mourned for those who lost their lives.

"I don't know where to head. To my damaged office? To my home? Or should I look for a house where my children can live? We don't know. It's a nightmare," Mohannad Al-Jarousha, a resident in Gaza said.

In Dahmash, a small Arab village outside of Tel-Aviv, the Ismail family spoke with us about their brother-in-law and niece who were killed in the rocket attacks.

"She was lying here on the ground, he was lying there. I tried to save them, check their pulse and signs of life. Then suddenly, nothing. Just bleeding, no pulse, no breathing. No signs of life at all," Yusef Ismail, a Dahmash resident and paramedic said.

In Ashdod, a coastal city with one of the largest ports in Israel, families stood in the wreckage of what was once their homes -- now replaced with collapsed ceilings, scorched walls and shattered windows.

"First of all, what kind of help are we getting from the government? Not even now that I’m in this situation. My husband is 80 years old, I'm 74. Are we supposed to start everything from the beginning," Malka Shtilerman, a resident of Ashdod said.

The question on everyone’s mind? What comes next?

"I don't know how to start! Where to start from," Al-Jarousha said. "What I lost in my home is costlier than its cost. Not from a material side, but from a spiritual one."

"A cease-fire is like taking an aspirin for pain, but it keeps coming back all the time. It’s like the half-time break in a soccer game. They return afterwards to play. Here you have a different sort of game, more complicated with wounded people. Cease-fire? You have to find a real solution," Alex Mazal, a resident of Ashdod said.