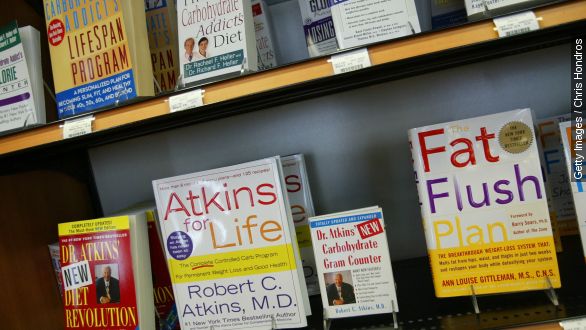 There are plenty of weight loss programs out there to choose from.

"You can lose weight simply with Jenny Craig."

"With Atkins, now you can."

But there's not always a lot of reputable evidence as to which ones may work the best.

A new study published Monday in the Annals of Internal Medicine aimed to do just that and figure out what weight loss programs truly accomplish their goal of getting you to lose weight.

The researchers said there are some 4,200 studies involving commercial diet programs, but the Johns Hopkins University-led study focused on just 45 of them that follow science's gold standard of randomly assigning or not assigning someone a weight loss program and tracking their progress over time.

Three of the U.S.' most popular diets saw positive results over time in comparison to education and counseling — which was the control group. Weight Watchers participants lost about 8 pounds on average, or 2.6 percent more than the control group over a 12-month span. The Jenny Craig program boasted even better results with an average of 15 pounds, or 4.9 percent more than the control over the same time. Those using NutriSystem also achieved results with 3.8 percent greater weight loss over a three-month span.

Positive results for those programs are huge, too, since those three alone control more than 70 percent of the $2.5 billion weight loss service market.

While, on average, the weight loss numbers aren't huge, doctors say losing a few pounds and keeping it off can have big health benefits.

The Centers for Disease Control and Prevention reports those who lose weight gradually have a better chance of keeping it off and, while they may still be overweight or obese, the decreases in weight can improve blood pressure, blood cholesterol and blood sugars.

The researchers also pointed to the Affordable Care Act for making counseling and screenings more readily available for those who want it.

Researchers tested other diet plans aside from those main three, including Slimfast, Atkins, very low-calorie programs and others.