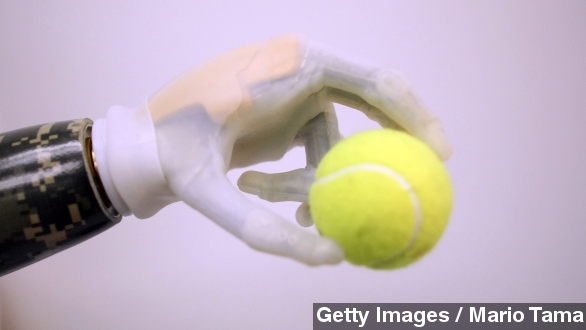 Research published in The Lancet took three patients who had lost control of their hands and worked on training them to control a bionic hand with their minds. (Video via The Lancet)

Their damaged hands were then amputated and replaced with the prostheses, and the damaged nerves in their spinal cords were reconstructed with nerves from their legs.

The actual nerve signals are too weak for the prosthesis to pick up, so the researchers used muscle tissue to amplify those signals and sensors on the patients' skin to detect them.

The researchers expect progress on this type of prosthetic replacement will be slow. (Video via SuperMed)

Professor Oskar Aszmann explained, "The timeframe will definitely be very slow because we're dealing with human beings, and we need to be very sure that what we do doesn't harm the patient."

The technology here isn't new: Researchers have been developing ways for people to mentally control prosthetic hands and limbs for a while now, with varying degrees of success. (Video via Discovery)

What's new is amputating a damaged extremity to replace it with a prosthesis, allowing the damaged nerves to be repaired in the process, something the researchers say could be replicated at other medical centers.