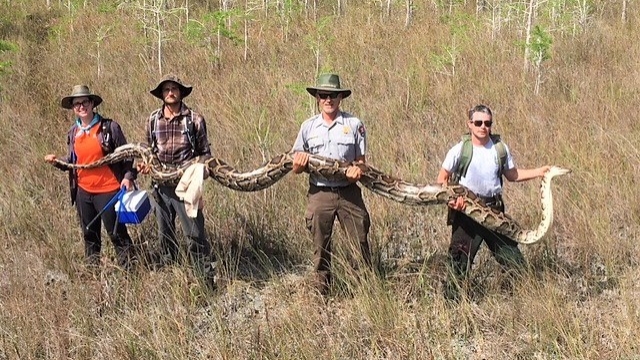 This is the largest Burmese python to ever be pulled out of the Big Cypress National Preserve in south Florida. It was over 17 feet long, weighed 140 pounds and was developing dozens of eggs — 73 to be exact.

While pythons are removed from the Florida Everglades every year, they're usually between six and 10 feet long.

Researchers at the preserve say they found this snake using a new kind of approach — male pythons with radio transmitters that lead them to breeding females. The approach not only gives scientists the opportunity to remove the invasive species from area, but it also helps them learn how the snakes use the preserve.

Burmese pythons are native to Southeast Asia, but now they're living and reproducing in the wild in south Florida. The National Park Service says pet owners have released the snakes when they've gotten too big, and pythons were "inadvertently or intentionally released when hurricanes blew through" the state.

Pythons are a major threat to the wildlife in south Florida, and they don't have a natural predator in North America. Some experts estimate there are 100,000 pythons living in the Everglades. The Florida Fish and Wildlife Conservation Commission has asked for the public's help in removing the invasive species and even holds competitions to remove as many as possible.