This Flying Robot Gets Its Agility From Bat Biology 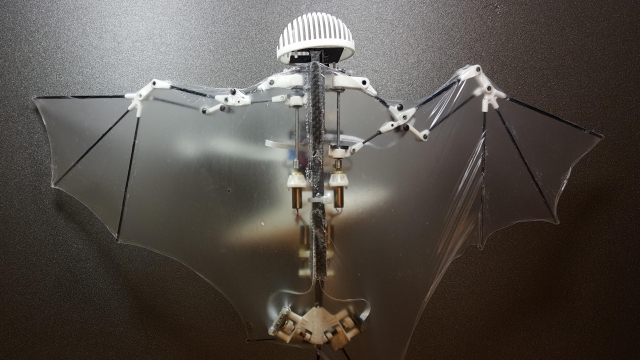 SMS
This Flying Robot Gets Its Agility From Bat Biology
By Evan Thomas
By Evan Thomas
February 1, 2017
Robots that have flexible wings like a bat's could be more maneuverable than a drone.
SHOW TRANSCRIPT

Researchers have developed an autonomous flying robot that takes some cues from the only mammal that can fly on its own — the bat.

But it's not as complex as the real thing; some live bats have 40 joints in their wings. So engineers simplified and built the robot using only the most important joints for flight. The bot has a flexible tail like a bat's and is covered with a stretchy, synthetic version of bat skin.

Most importantly, researchers made sure each wing can move independently, just like a bat's. This lets the robot take sharp turns and dives. 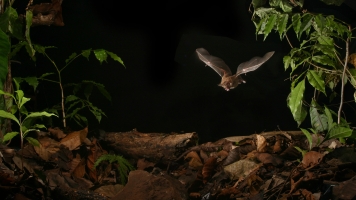 Bats Can Learn To Put Up With Us Noisy Humans

Robots that flap still look a bit clunky compared to the smooth flight of something like a quadcopter drone, but the animal kingdom might be onto something. Flying animals are way more maneuverable than planes or even helicopters. They can make harder turns and rolls, they can hold up to more G-forces, and for some, hovering mid-flight is really easy.

The researchers building this bot think their work might lead to nimble flying tools that can stop or turn on a dime. That could be useful during construction or for search and rescue. They might be safer for nearby humans, too. Soft, flapping wings don't have to move nearly as fast as drone propellers.