Research Says Complex Tools Might Not Be 'Our Thing' Anymore 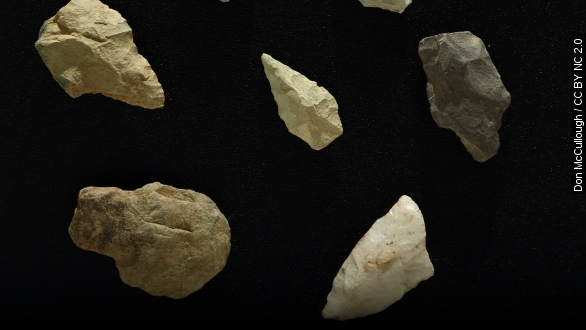 For a long time, the ability to do this — craft complex tools out of natural materials — has been seen as a uniquely human characteristic.

Sure, all sorts of animals from elephants to crows use basic tools, but complex tools like stone implements have long been the purview of humanity. (Video via BBC, Real Africa)

At a conference in San Francisco, a researcher from Stony Brook University presented evidence of stone tools dating back 3.3 million years.

Seeing as the earliest records we've found of our predecessors in the genus Homo only go back some 2.5 million years, that could mean complex tool-making predates humanity. (Video via YouTube / John Hawks)

So who could have made the tools? One likely candidate lived in the area they were found: Australopithecus. (Video via Howard Hughes Medical Institute)

Australopithecus, made famous by the Lucy skeleton, is thought to have lived in eastern Africa between 4 million and 3 million years ago.

While Australopithecus walked upright like us and looked kind of like us, scientists generally believed it didn't use stone tools. (Video via California Academy of Sciences)

Even when researchers published evidence in 2010 of cut marks on bones that they say indicate some species of Australopithecus used implements to cut up meat, it became the subject of debate.

But the newest findings seem to add credence to that 2010 paper, with researchers saying the tools are stone flakes, which could conceivably have been used for cutting. (Video via Emory University)