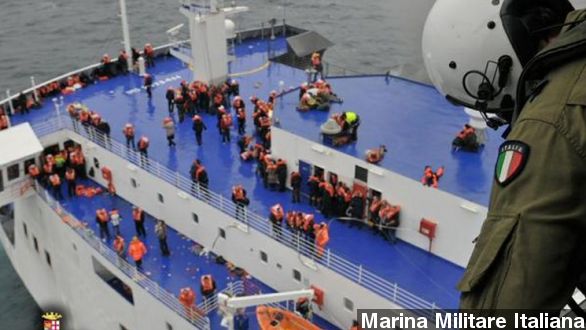 European air and naval crews continued search-and-rescue efforts overnight Sunday and into Monday morning for more than 100 passengers stranded on a burning ferry in the Adriatic Sea off the western coast of Greece.

As of early Monday morning, the Italian Navy announced it had evacuated all passengers with only the ship's commander and four Navy officials still on board. Rough seas and freezing conditions made rescue operations difficult. (Video via NBC / Marina Militare Italiana)

Greek Shipping Minister Miltiadis Varvitsiotis told reporters, "We're doing everything we can to save those on board. ... It is one of the most complicated rescue operations that we've ever done and for which the assistance of multiple forces is needed."

CNN reports one Greek man was killed "after he jumped or fell into the cold and rough water" and at least six others died. One passenger described the scene as "Like [the] Titanic."

Journalist Barbie Nadeau told CNN, "They are freezing, literally freezing out there. ... They could feel the heat, the burning fire underneath them, on the decks above the ship, but, yet, they were so cold from the elements outside: these rough seas, these high winds."

Ferry passenger Sofoklis Stiliaras said, "We can see the fire down in the lot. Our shoes have started melting on the floor. The floor is burning."

Authorities say the fire is believed to have broken out on the ship's car deck Sunday near the Greek island of Corfu but aren't sure what ignited the flames. (Video via Rai)

One truck driver who was a passenger is quoted in CNN saying, "trucks filled with oil were 'packed like sardines'" on the vessel.

And, according to Sky News, officials believe the ferry was holding about 195 vehicles when the fire started.

Of the more than 450 passengers and crew originally on board the burning vessel, the majority are Greeks, while dozens of others are from various European and international locations.