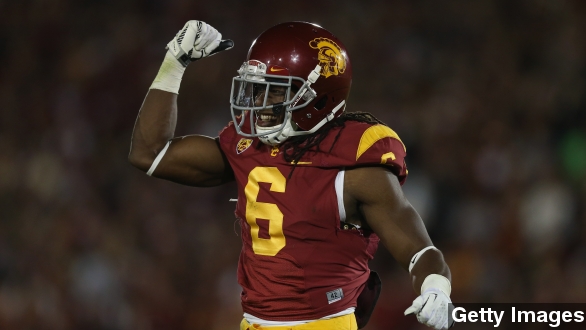 By Christian Bryant
August 26, 2014
University of Southern California and Los Angeles law enforcement are looking into Shaw's claim that he sprained his ankle rescuing his nephew.
SHOW TRANSCRIPT

It sounds like a story of unbelievable heroism: University of Southern California cornerback and team captain Josh Shaw suffered two sprained ankles and is out indefinitely after saving his nephew from drowning.

USC first reported the news. Shaw was attending a family function in Palmdale, Calif. Saturday when he saw his 7-year-old nephew drowning in a pool. According to USC, Shaw "instinctively leaped" from a second-story balcony, landed "painfully on the concrete below" and was able to pull his nephew to safety.

Sarkisian didn't elaborate on where those calls came from and ultimately defended Shaw's character, saying he has no reason not to believe his story.

But other reporters have pointed to inconsistent details as reasons to be skeptical.

While the original account came from Shaw, at least two reporters say USC is to blame for promoting the story. NFL and college football writer Bryan Fischer said the holes should've made USC pump the brakes and CBS Sports' Chip Patterson calls this "a cautionary tale for schools looking to serve as THE primary outlet for news."

Both USC and local law enforcement are investigating. Shaw has yet to speak publicly about Saturday's incident.