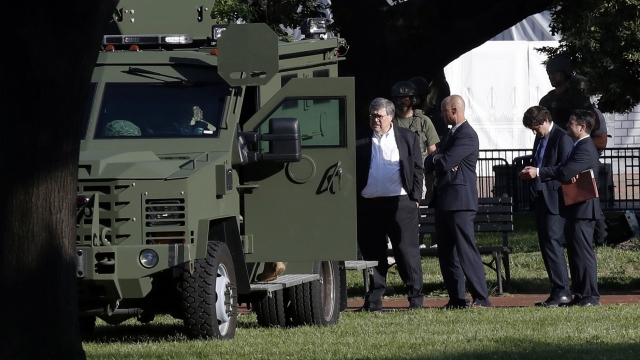 SMS
Former DOJ Officials Call For Investigation Into Protest Clearing
By Meg Hilling
By Meg Hilling
June 11, 2020
Ex-DOJ officials want any evidence of misconduct by Barr or any DOJ employee presented to the public.
SHOW TRANSCRIPT

Nearly 1,300 former Department of Justice officials are calling for an internal investigation into Attorney General William Barr's role in the clearing of protesters from Lafayette Park earlier this month.

In a letter made public Wednesday, the officials wrote "We are deeply concerned about the Department’s actions, and those of Attorney General William Barr himself, in response to the nationwide lawful gatherings to protest the systemic racism that has plagued this country throughout its history, recently exemplified by the brutal killings of George Floyd and Breonna Taylor by sworn law enforcement officers acting under the color of law."

The officials say they are "disturbed" by Barr's "possible role in ordering law enforcement personnel to suppress a peaceful domestic protest" in Lafayette Square, so that President Trump could take a photo outside of St. John’s Episcopal Church. In addition, the officials cited "profound doubts" the law enforcement that dispersed the protesters were "adequately trained policing mass protests or protecting the constitutional rights of individuals."

The officials want the department's Inspector General Michael Horowitz to investigate the incident and share with the public any evidence of misconduct by either Barr's part or any DOJ employee.

White House spokeswoman Kayleigh McEnany had said it was Barr's decision to push out the crowd. But Barr told the Associated Press that while he supported the move, it was already in the works when he arrived.

Contains footage from CNN. Additional reporting by Michael Balsamo of The Associated Press.