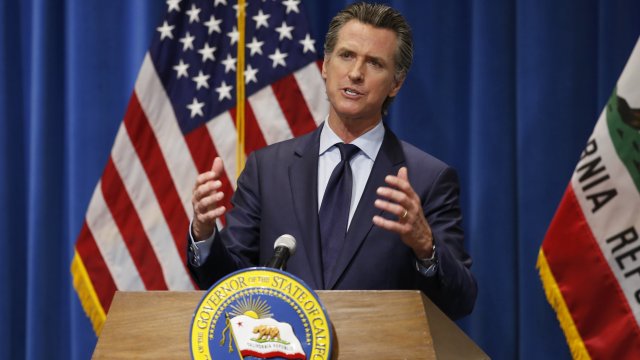 The Republican National Committee and other GOP groups are suing California Gov. Gavin Newsom over his executive order to send mail-in ballots to all voters for the November election.

The RNC, National Republican Congressional Committee and the California Republican Party filed suit on Sunday, arguing Newsom's order could lead to voter fraud because the state is planning to mail ballots to inactive voters automatically.

It's worth noting that studies have not found any evidence of widespread voter fraud connected to voting by mail.

Newsom issued the order earlier this month, making California the first state to switch to all-mail voting because of the coronavirus pandemic. On Twitter, RNC Chairwoman Ronna McDaniel said the "radical plan is a recipe for disaster that would create more opportunities for fraud & destroy the confidence Californians deserve to have in their elections."

On Sunday, the president tweeted that the U.S. voting entirely by mail would lead to "the greatest Rigged Election in history." He also alleged voting by mail would cause "thousands of forgeries" or that people would be forced to sign absentee ballots, although there's no evidence that that's true.

Newsom and Democrats argue the move is necessary to make sure voters are safe during the pandemic.

California Secretary of State Alex Padilla responded to the lawsuit on Twitter. He said: "Expanding vote-by-mail during a pandemic is not a partisan issue — it's a moral imperative to protect voting rights and public safety. Vote-by-mail has been used safely and effectively in red, blue, and purple states for years."