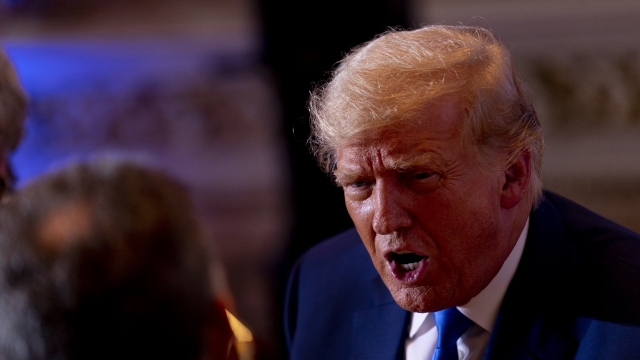 The criticism this week was directed at Donald Trump, as Republicans grapple with an underwhelming performance in the midterms.

The red wave that wasn’t is turning red-leaning media away from the former President.

"The populist movement is about ideas. It is not about any one person. If the voters conclude that you’re putting your own ego or your own grudges ahead of what’s good for the country, they’re going to look elsewhere, period," said Laura Ingram, a host on Fox News Channel.

The criticism this week was directed at Donald Trump, as Republicans grapple with an underwhelming performance in the midterms. The party looked to the former president to pick the candidates, who based many of his picks on whether they denied the results of the 2020 election. Some of those candidates lost.

Now, control of the Senate could come down to Georgia and the Trump picked, scandal prone Herschel Walker.

"A lot of people in the Republican party are probably going to say maybe he shouldn't be the head of our party if he's choosing candidates like this," said Todd Belt, director of political management at George Washington University.

The papers local to Trump’s home state and owned by conservative Rupert Murdoch aren’t holding back. Splashy headlines called him the "party’s biggest loser" depicting him as Humpty Dumpty and describing a "post-midterm tantrum," pushing hard to turn the GOP tide against him.

The former president has sought to use the midterms as an opportunity to prove his enduring political influence after losing the White House in 2020.

A Wall Street Journal editorial said "Mr. Trump has a perfect record of electoral defeat. The GOP was pounded in the 2018 midterms owing to his low approval rating. Mr. Trump himself lost in 2020. He then sabotaged Georgia’s 2021 runoffs by blaming party leaders for not somehow overturning his defeat."

The ire on Fox News isn’t just coming from the hosts. It’s coming from elected Republicans who once supported the former president, including Virginia’s Lt. Governor Winsome Sears, who once served as Chair of Black Americans to Re-Elect President Trump.

"I could not support him, I just couldn’t. The voters have spoken, and they’ve said that they want a different leader. And a true leader understands when they have become a liability," said Winsome Sears, Lt. Governor of Virginia.

Now the question remains if not Trump, then who? The former president is teasing a big announcement Tuesday evening and is expected to make another run for the Oval. And as he awaits the announcement, he's going after potential opponents.

He ripped Florida Governor Ron DeSantis – nicknaming him, taking credit for his success and calling him average, after DeSantis’ monumental re-election win. He’s widely considered a possibility to take on Trump, in addition to at least a handful of other members of his cabinet.

"There's going to be a lot of Republicans who are thinking really carefully about putting together an exploratory committee and seeing whether or not they have what it takes to challenge Donald Trump," said Belt.