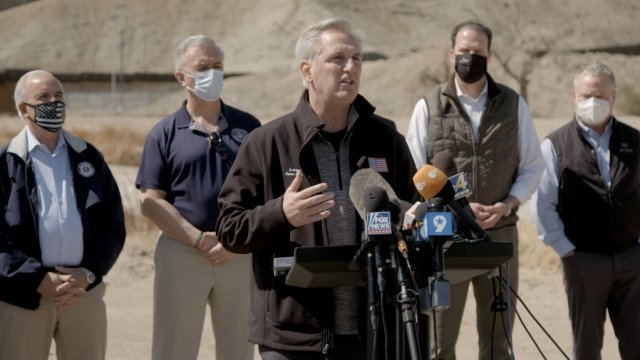 "It is more than a crisis. This is a human heartbreak," said House Minority Leader Kevin McCarthy.

House Republicans — nearly 2,000 miles from Washington — assessing the situation at the border — and saying it's becoming increasingly untenable as the administration refuses to call it a crisis.

"This is a crisis of a huge magnitude. Sadly, it was created, I think, by President Biden and his minions," Rep. Chuck Fleischmann told Newsy.

The visit comes as CBS News reports more than 4,000 unaccompanied minors are sitting in border patrol facilities right now — a 31% increase from just last week. Nearly three-quarters of them are held for longer than the 72 hours allowed by law.

"Migrants are being cared for very well once they get here. It was amazing. Three square meals, health care, clothes, fed. We should be proud of our humanitarian efforts," said Fleischmann.

"When we walked those facilities and we looked in those rooms that were packed, these were children with no parents," said McCarthy.

While the numbers tell us these facilities are overcrowded, we have not been able to see the conditions for ourselves. The administration has not allowed any press to tour any facility across the country.

It hasn’t even released its own video, like the Trump administration did.

McCarthy says the new facility he toured was built to hold more than 1,000 people and yet still overflowing.

"They're having to build into the parking lot of a makeshift facility," he said.

Republicans say they’re concerned with security in these border towns, but those who work here on the ground every day say they have a different security concern.

Ruben Garcia runs the largest refugee shelter in El Paso. He says it's the rhetoric like statements made by Republicans at the border Monday that put immigrants at risk

Garcia does not see the situation as a crisis.

"I think it's important for us to distinguish between being overwhelmed and being overworked," he said.

Still, the Biden administration is scrambling to find places for the undocumented minors to live while their families are contacted, from a NASA facility in California to the convention center in Dallas. Even FEMA is now involved for at least for the next three months.