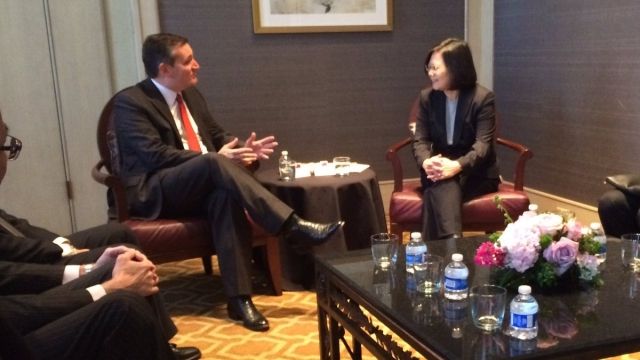 Sen. Ted Cruz said members of Congress were asked by China not to meet with President Tsai Ing-wen.

According to Cruz, the Chinese consulate asked members of Congress not to meet with President Tsai Ing-wen as she traveled through the U.S.

But Cruz sat down with the Taiwanese leader anyway, adding China doesn't give the U.S. "veto power" over meetings involving its leaders.

China has long claimed control over Taiwan through its one-China policy, even though the island has held its own democratic elections for decades.

Unsurprisingly, China condemned the meeting, as it did when President-elect Donald Trump spoke with Tsai over the phone last month.

China promised to return the U.S. underwater vehicle it seized in the South China Sea.

After that call, Trump caused a stir when he said he didn't understand why the U.S. should be bound to that policy.

He told Fox News, "I don't want China dictating to me."

The U.S. is not necessarily bound by the one-China policy, but historically, we've agreed not to meddle in China's relationship with Taiwan. Trump is the first U.S. president in decades to have contact with a Taiwanese leader, as far as the public knows.

A Chinese state-run newspaper claimed Sunday that if the Trump administration went against the one-China policy, China's citizens would demand revenge against the U.S.