Republicans Get Creative In Contest For Main Debate Stage 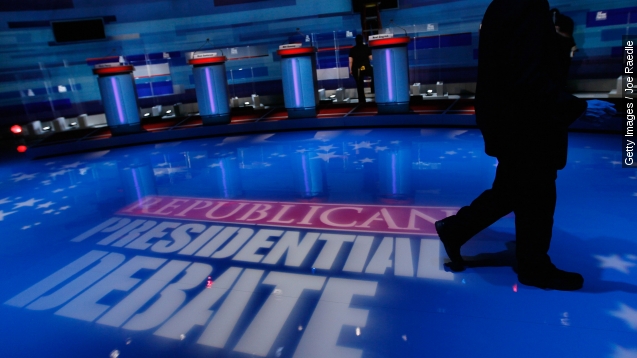 SMS
Republicans Get Creative In Contest For Main Debate Stage
By Eugene Daniels
By Eugene Daniels
July 28, 2015
Even after Fox News loosened attendance, there are still only 10 spots on the prime-time broadcast for the first Republican presidential debate.
SHOW TRANSCRIPT

We're days away from the first Republican presidential debate, and while a recent rule change by Fox News means all the candidates will be included, there's a 10-person cutoff on the main event, leaving some scrambling for a spot on stage.

If you take a look at the latest five polls, eight candidates look like they have spots locked down. But ninth and 10th place are still up for grabs.

Senator Lindsey Graham, who likely won't make it to the main stage, has said a cutoff this early in the campaign makes the contest all about name recognition.

"CNN and Fox News have come up with criteria to get in the debate that I think is silly. If my numbers go up, it's because I call Donald Trump a jackass. ... You're testing celebrity and name ID. Give us all a chance early on to make our case," Senator Lindsey Graham told MSNBC's "Morning Joe."

If he's right, that means candidates near the cutoff have every reason to go on a publicity blitz between now and the debate. And they are. Take Rick Santorum, for instance.

Others are throwing out some big money on ads. New Jersey Governor Chris Christie spent $250,000 last week on ads just on Fox News. His super PAC spent $800,000 for Fox News and Fox Business ads. (Video via Chris Christie for President)

But there's a cheaper tactic for those in the back of the pack: attack the guy in the front.

"Let no one be mistaken: Donald Trump's candidacy is a cancer on conservatism and it must be clearly diagnosed and discarded," Rick Perry said in a speech last week. (Video via ABC)

"I have paid no attention to that whole business," Kasich told ABC.

But Kasich's chief strategist took a dig at the frontrunner by comparing Trump to a drunk NASCAR driver on Twitter.

Even Graham was able to use Trump after the frontrunner gave out the Senator's phone number. A video of Graham showing us the many ways to destroy a cell phone popped up — dramatic music included. (Video via Independent Journal Review)

Now, for those that don't make the top ten this time around, let's not forget: there are 11 more debates scheduled through March.

This video includes images from Getty Images and Lindsey Graham.