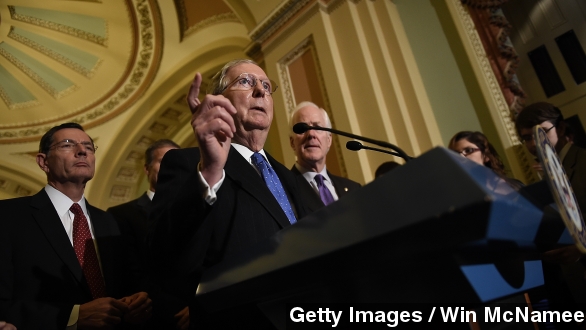 Republicans are in an uproar over reports Thursday that President Obama is planning to sign executive orders that would, among other things, give work permits to five million undocumented immigrants.

It's something Obama has hinted at before. The president hasn't been shy about saying he would bypass Congress on immigration reform.

"Before the end of the year, we're going to take whatever action that I can take that I believe will improve the functioning of our immigration system."

But not only did administration officials reveal some specifics Thursday, like Obama's plan to extend protections to people who came into the country illegally as children, The New York Times also reported those actions could come "as soon as next week."

Obama is currently in the middle of a week-long trip to Asia, and White House officials refused to comment on the story until the president is back in Washington, but they did say nothing is set in stone.

Congressional Republicans spent all day trying to change the president's mind. Their responses ranged from pleas for more time:

REP TREY GOWDY VIA FOX NEWS: "Why can't he give the Republican House and Senate three months, six months, nine months to do what he wasn't able to do in two years?"

SEN. MITCH MCCONNELL VIA C-SPAN: "His executive actions are not permanent changes. They won't necessarily be there under the next president."

To not-so-vague threats of another government shutdown.

REP. JOHN BOEHNER VIA C-SPAN: "We're going to fight the president tooth and nail. ... All options are on the table."

They shutdown option may be the only thing they can really do. Republicans famously ground the government to a halt for 16 days last year in an effort to defund or delay Obamacare. They'll have the opportunity to do that again when federal funding runs out in mid-December.

It's a powerful threat, but it may also be a bluff. Many Republicans viewed the shutdown as politically damaging to their brand, and party leaders may not be too eager to repeat it.

The Washington Post says the threat of a shutdown puts John Boehner and Mitch McConnell in a tough spot, "forcing them to balance their desire to show that GOP can govern and their fears of upsetting the conservatives who lifted them to power."

Republicans aren't alone in asking The White House not to go it alone. Sen. Harry Reid also reportedly asked the administration not to do anything rash — at least until after a deal to avert a shutdown is in place.

This video includes images from The White House and Getty Images.