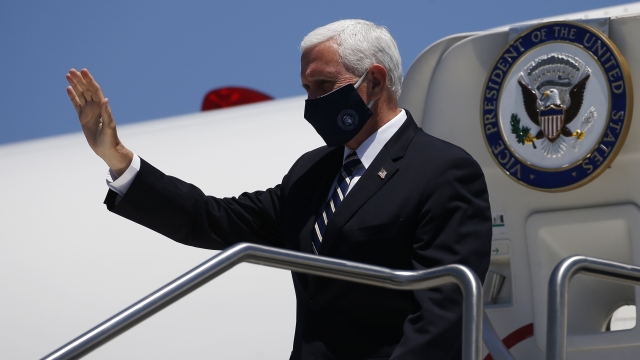 SMS
Bipartisan Calls For Masks Grow As Coronavirus Cases Surge
By Nathaniel Reed
By Nathaniel Reed
July 1, 2020
As cases of the coronavirus continue to rise across the country, officials on both sides of the aisle are calling on Americans to wear masks outdoors.
SHOW TRANSCRIPT

As cases of the coronavirus increase across the country, President Trump is increasingly isolated from his own party and public opinion, by not wearing a mask in public or calling for their widespread use.

While Democrats have been calling for the president to wear a mask and encourage their use for months, some Republicans have begun joining the chorus, with many medical experts in agreement that masks are often effective.

“If [Arizonians] do go out, we want them to mask up,” Arizona Gov. Doug Ducey told reporters, while sitting alongside the vice president.

“The whole mask issue right now is being over politicized,” Georgia’s Republican governor Brian Kemp told reporters after a surge in cases.

A new study from Florida Atlantic University shows the dramatic difference a mask can make.

Their experiments showed speaking without a mask can send droplets potentially carrying the coronavirus up to 8 feet.

But with a quilted cotton mask, droplets were only detected traveling 2.5 inches.

So far, President Trump is doubling down on his decision to not wear a mask publicly, even though a Newsy-Iposos poll showed 74% of Americans, including over half of Republicans, think the president should wear a mask.

“The president has said that we should follow our local authorities with masks,” White House press secretary Kayleigh McEnany told reporters Wednesday.

“The CDC guidelines say ‘recommended’, not ‘required'," she said.

“Basically, mask wearing is about age and not politics,” explained Ron Bonjean, a Republican strategist who has previously worked with the Trump administration.

Bonjean’s firm, ROKK Solutions, has conducted polling showing there’s a minimal political divide when it comes to wearing a mask.

“I understand why the president doesn't want to wear a mask: because he wants to show that he's the president and that he’s strong. But at the same time, now, showing strength is about protecting the most vulnerable part of our population, and that’s seniors,” he told Newsy.

On Friday, the president intends to travel to Mount Rushmore for an early July Fourth celebration, and the state’s Republican governor, Kristi Noem, has made it clear typical coronavirus precautions, including masks and social distancing, are not required.