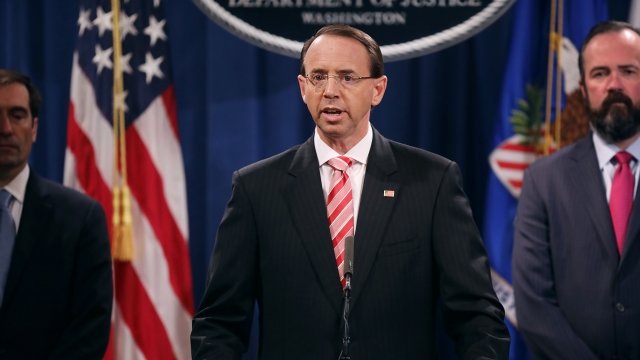 Ryan told reporters Thursday that he'd like the Department of Justice to hand over documents that Congress has requested, but that not doing so isn't at the level of "high crimes and misdemeanors" that might require impeachment.

Ryan's not the only high-ranking Republican pushing back against the impeachment effort, either. Attorney General Jeff Sessions told reporters he has "the highest confidence" in Rosenstein.

But other Republicans are siding with the 11 House members who brought the articles of impeachment Wednesday.

Majority Whip Steve Scalise — the third-ranking Republican in the House — told Fox News he'd vote for the resolution if it got to the floor. But Scalise also told The Washington Post the vote was more about "leverage" to get information from the Justice Department.

And Rep. Duncan Hunter reportedly gave a floor speech Thursday calling for Rosenstein's impeachment so the president could "do the work the American people duly elected him to do."

It's not clear when, or even if, the impeachment resolution will get a vote. But Rep. Mark Meadows said the vote wouldn't happen before Congress' August recess.