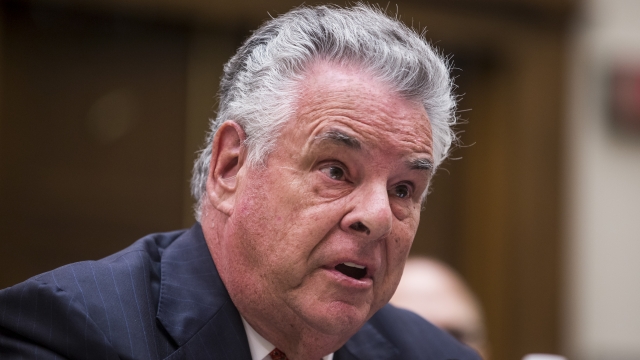 SMS
Republican Rep. Peter King Not Seeking Reelection In 2020
By Caitlin Baldwin
By Caitlin Baldwin
November 11, 2019
King has served as a U.S. representative for New York for more than two decades but has decided to step down to focus on his family.
SHOW TRANSCRIPT

U.S. Rep. Peter King will not be seeking reelection next year. The longtime Republican congressman for New York announced his retirement Monday.

He said he made the difficult decision to retire so he could spend more time with his children and grandchildren, adding his daughter's move to North Carolina accelerated his thinking. King said in a Facebook post, "The prime reason for my decision was that after 28 years of spending 4 days a week in Washington, D.C., it is time to end the weekly commute and be home in Seaford."

King has served as a representative for New York for more than two decades. He won his last reelection by only 6 percentage points. The congressman built a reputation for being notoriously bipartisan while also strict on immigration and anti-terrorism. King was also a former chairman of the Homeland Security Committee.

King said that he will spend his remaining time in office voting against President Donald Trump's impeachment and supporting the president's reelection bid.

With King's announcement, New York's 2nd congressional district will likely be a major target for Democrats in the 2020 election as it was only narrowly won by President Trump.

King joins a long list of congressional Republicans not seeking reelection in 2020, including Rep. Will Hurd and Rep. Jim Sensenbrenner.