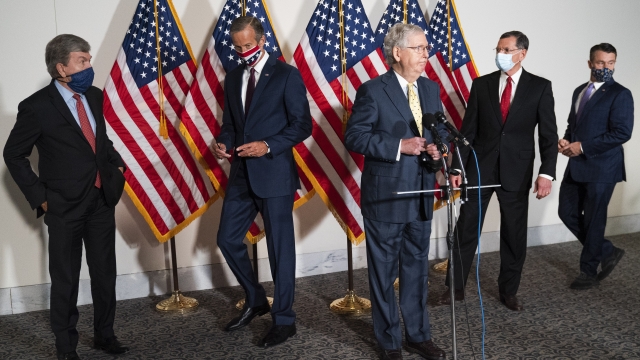 SMS
Republican-led Coronavirus Relief Bill Fails In Senate
By Nathaniel Reed
By Nathaniel Reed
September 10, 2020
In what may be Congress's final shot at passing a coronavirus relief bill, an aid effort failed Thursday in a partisan vote on the Senate floor.
SHOW TRANSCRIPT

In what may be Congress's final shot at passing a coronavirus relief bill, an aid measure failed Thursday in a partisan vote on the Senate floor.

Senator Rand Paul of Kentucky, the only Republican to vote against the bill, has said he is against additional spending on a next-round relief bill.

Minority Leader Chuck Schumer blasted the GOP’s proposal during a speech on the Senate floor Thursday.

"This bill is not going to happen because it is so emaciated, so filled with poison pills, so partisanly designed, it was designed to fail," he said.

But the bill did not include funding for state and local governments — a key component of the Democratic-led Heroes Act, which passed the House nearly four months ago.

Efforts to provide Americans with more relief have hit a number of bumps, including early opposition by some Republicans for more spending, and White House negotiations with Speaker Nancy Pelosi that failed to produce a compromise.

Thursday's vote could be the final nail in the coffin for a deal on coronavirus relief before Election Day.

Sen. Richard Shelby of Alabama, chairman the powerful Senate Appropriations Committee, told reporters he thinks a relief bill won't happen until after the election... meaning millions of Americans may have to wait up to two months for another bill to considered.