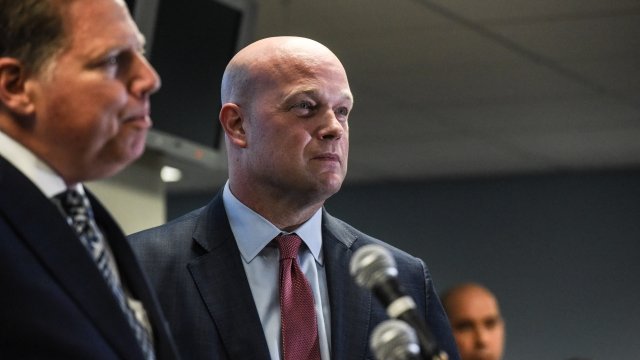 By Cristina Mutchler
December 20, 2018
Media outlets are reporting that the acting Attorney General made the decision after speaking with Justice Department ethics officials.
SHOW TRANSCRIPT

Acting Attorney General Matthew Whitaker has reportedly decided not to recuse himself from overseeing the Russia probe.

According to multiple media outlets, Whitaker talked with Justice Department ethics officials before coming to that conclusion.

Whether Whitaker would oversee special counsel Robert Mueller's Russia investigation has been a lingering question ever since he stepped into the temporary role following Jeff Sessions' resignation.

That's because Whitaker has criticized the probe in the past, which led to Democratic senators challenging whether or not he could remain impartial about it.

Sessions had recused himself from overseeing the investigation because of his involvement with the Trump campaign. That made Deputy Attorney General Rod Rosenstein in charge of it.

Rosenstein told reporters Thursday there shouldn't be any concerns about who's overseeing the probe.

In any case, Whitaker likely won't be in the picture long-term. Earlier this month, President Donald Trump announced his plans to nominate William Barr as his next attorney general.