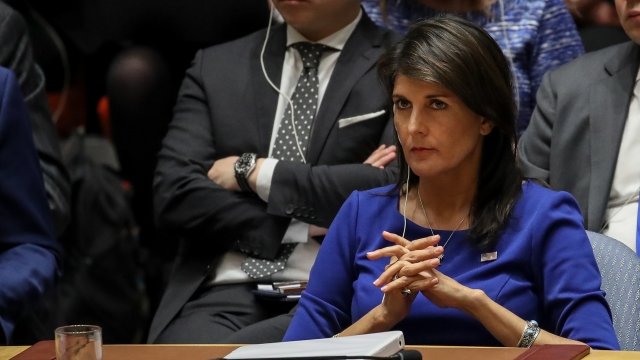 SMS
Reports: US To Leave UN Human Rights Council
By Jake Jones
By Jake Jones
June 15, 2018
The push to leave is reportedly being spearheaded by Ambassador Nikki Haley, who's been critical of the council in the past.
SHOW TRANSCRIPT

The U.S. is reportedly going to step down from its seat on the United Nations' Human Rights Council. That's according to anonymous sources that spoke to The Associated Press and Reuters.

The push to leave the council is reportedly being spearheaded by U.N. Ambassador Nikki Haley, who has criticized the HRC and says it holds an "anti-Israel bias."

The council's rules require it to discuss alleged Israeli abuses against Palestinians every session. Haley and others say that's unfair since alleged abuses by some member countries, like Venezuela and China, aren't regularly discussed.

The HRC is set to start a three-week session Monday. Sources reportedly said the U.S. could announce its decision to vacate its seat as early as Tuesday.