Reports: Senate Will Not Vote On Obamacare Repeal Bill 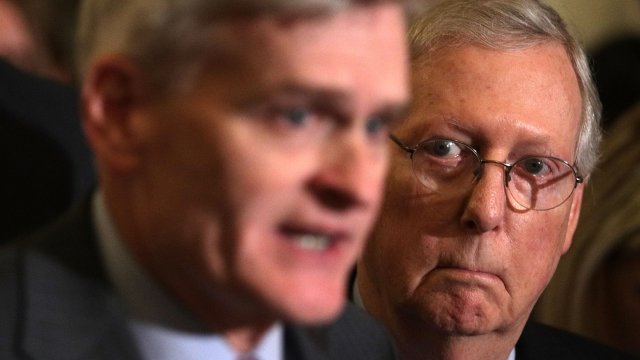 Senate Republicans will not vote on the latest bill that would repeal and replace the Affordable Care Act, multiple outlets are reporting.

The bill proposed by Sens. Lindsey Graham and Bill Cassidy was revised in an attempt to court votes from worried Republicans — notably Sens. Susan Collins and Lisa Murkowski. Sens. John McCain and Rand Paul had already said they would not support the bill before changes were made.

The bill would have ended Obamacare subsidies and replaced them with block grants, and would also have ended the ACA's individual mandate and Medicaid expansion. Last-minute changes would have given extra funding to "high-spending low-density" states.

America's Mayors Still Aren't On Board With Obamacare Repeal

Mayors have been speaking out about the GOP's plan to repeal Obamacare for months.

But the fate of the bill was sealed when Collins and Sen. Ted Cruz signaled they would not support the bill.

The bill was the GOP's last chance to pass a bill this year under a special legislative process known as budget reconciliation. That process would have allowed the Senate to pass the Graham-Cassidy bill with only 50 votes, with Vice President Mike Pence casting a tie-breaking vote. Reconciliation ends at the end of September, along with the 2017 fiscal year.