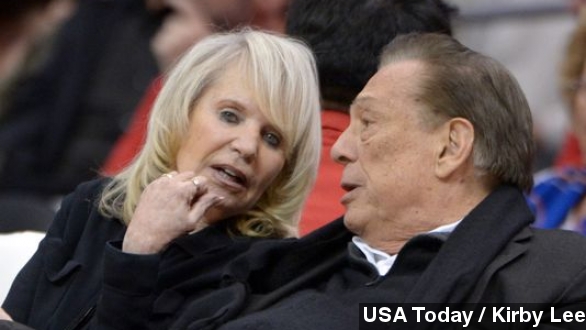 By Steven Sparkman
May 15, 2014
Anonymous sources tell several media outlets the embattled Clippers owner has threatened to sue the league, claiming he did nothing wrong.
SHOW TRANSCRIPT

Sports outlets are reporting that embattled Clippers owner Donald Sterling has decided to put up a fight. He is supposedly planning to sue the NBA and refusing to pay the $2.5 million the league fined him last month.

Sports Illustrated and USA Today both quote anonymous sources who say Sterling has hired Maxwell Blecher, a well-known antitrust lawyer, and sent a letter telling the league Sterling's racist comments don't warrant "any punishment at all," adding "We reject your demand for payment."

Sterling's comments, which were recorded during a private conversation, caused such an uproar that NBA commissioner Adam Silver banned the 80 year old from the league for life, issued a fine and will reportedly try to get the other NBA owners to force Sterling to sell the team. (Via TMZ, NBA)

There have been hints that Sterling would put up a fight if the league did try to force a sale, but he told CNN's Anderson Cooper he didn't see it going that far.

​Since the ban was announced, analysts have been weighing in on Sterling's chances of winning a legal battle, and while most say it's an open-and-shut case, a CNN analyst reminds us of Sterling's past. (Via The Washington Post, ESPN)

"He moved the team, even though the NBA told him that he couldn't. The NBA sues him, he sues them back for more money, and guess what? The L.A. Clippers are in Los Angeles."

Plus, in a piece asking why the NBA is taking so long to make a move against Sterling, a Forbes contributor points out Sterling could still do a lot of damage to the league even if he ultimately loses.

"That does not stop either Sterling from commencing the action, and getting to a stage we call discovery.  During discovery, a lot of dirt can be discovered about the other owners."

Shelly Sterling has already made it clear she will fight to keep her half of the team, so if Thursdays news is correct, it looks like the Clippers' future just got a whole lot more complicated.