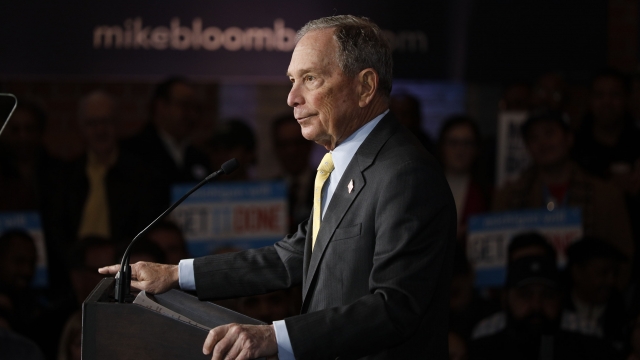 Michael Bloomberg is taking his campaign up a notch.

Amid confusion around Iowa caucus results, Bloomberg reportedly moved to double his spending on TV ads in markets he's already advertising in and expand his field staff to more than 2,000 people. That's according to reports from The New York Times and The Washington Post.

Bloomberg's made his goal very clear: Beat President Donald Trump. He's focusing his time and resources on larger states that will start voting in March and on swing states. Meanwhile, he's skipping the first four nominating contests this month. Bloomberg believes this will help him defeat the incumbent.

The Iowa caucuses were Monday, but caucus-goers woke up empty-handed: Results were put on hold thanks to technical issues. The Iowa Democratic Party said in a statement that it found "inconsistencies in the reporting of three sets of results," but that those were not related to "a hack or an intrusion."

But instead of spending time in Iowa, Bloomberg stopped in the Golden State. He made stops in Sacramento, Fresno and Compton.

"Today, there's something going on in Iowa. I heard something like that. That's where all the other Democratic candidates are. In fact, they've spent virtually all of the past few months in Iowa and other early primary states, but almost no time in California," Bloomberg said. "Well, I'm here, and I am here to win. We are going to defeat Donald Trump."

On Tuesday, instead of going to New Hampshire like the other Democratic candidates, he visited Detroit.

"I am running to defeat Donald Trump," Bloomberg said.

According to The Washington Post, Bloomberg is already running the most expensive campaign for the Democratic nomination in history. Ad Analytics reportedly found Bloomberg has spent more than $300 million on TV and digital advertising since entering the race a few months ago.