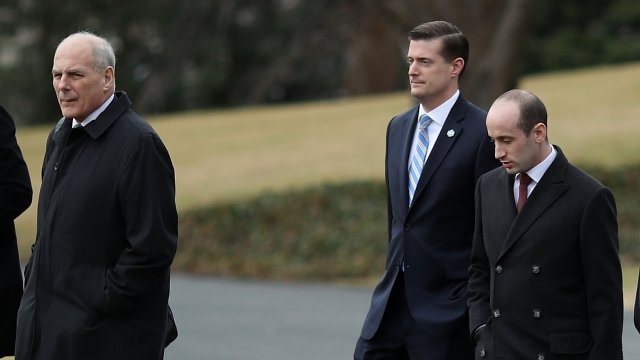 The FBI reportedly says that a file it sent to the White House in March of last year included information about abuse allegations against former staff secretary Rob Porter.

Two of Porter's ex-wives accused him of domestic assault. One said he gave her a black eye. Porter denied the allegations, but left the White House in February nonetheless. The White House has given conflicting, confusing accounts of what it knew when. The reports of Porter's ouster and his background investigation are just as confusing.

FBI Director Christopher Wray said in testimony earlier this year that his agency sent a partial report on Porter's background to the White House in March, a complete one in July and followed up in November.

A new timeline the FBI, sent to lawmakers, matches that account, but the March file reportedly included details about the allegations. The file would have come almost a year before Porter left his job. White House officials have said senior aides didn't know anything until shortly before Porter left.

The New York Times also reports Porter himself told White House counsel Don McGahn that one of his ex-wives was making potentially damaging claims about him.

So, the FBI's timeline and this new reporting reiterates a lot of questions about what White House officials were privy to, and what they did with the information they had. But it doesn't clear up the picture of Porter's tenure at and departure from the White House.