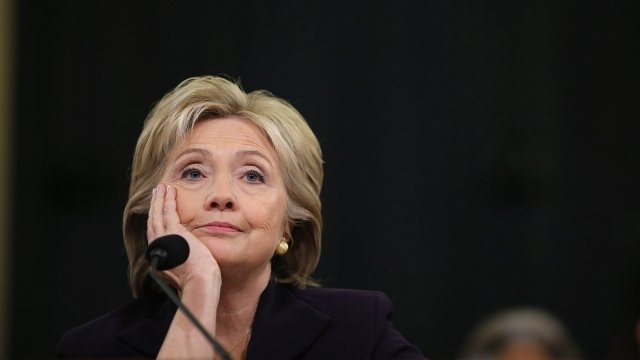 SMS
Reports: DOJ To Criticize Handling Of Clinton Email Investigation
By Jake Jones
By Jake Jones
June 7, 2018
The report is due in the next few days.
SHOW TRANSCRIPT

An upcoming report from the Department of Justice inspector general will fault department and FBI officials for their handling of the Hillary Clinton email investigation, according to multiple outlets.

The report is scheduled for release in the next few days. It will reportedly criticize former FBI Director James Comey for his letter to Congress. Days before the presidential election, he informed lawmakers the bureau had reopened its investigation into Clinton. That was after new evidence was discovered on a laptop shared by former congressman Anthony Weiner and his wife, Huma Abedin, who worked for Clinton.

The report is also expected to hit former FBI Deputy Director Andrew McCabe for the nearly monthlong gap between agents realizing there might be evidence on the laptop and getting a search warrant.

And finally, former Attorney General Loretta Lynch is reportedly mentioned as well. She's faced scrutiny for a meeting with former President Bill Clinton while the investigation into his wife was still underway.

Politicians from both sides are likely to jump on the report when it's released. The Associated Press suggests anything critical of Comey would help discredit possible claims that the president obstructed justice in firing Comey.

Democrats will also likely seize on the report if it faults Comey. Clinton has said his letter was a death blow for her campaign.