Zimbabwe's President Is Reportedly Safe And Confined To His Home 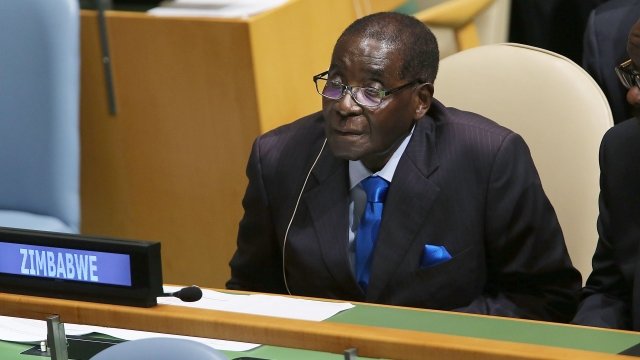 Confusion surrounds Zimbabwe as analysts say it looks like the country is in the middle of a military coup.

Confusion surrounds Zimbabwe as the country's military claims to be apprehending criminals, but analysts say the situation looks like a coup.

Soldiers reportedly took over the national broadcaster's headquarters. Military vehicles were seen in the streets Tuesday evening, and there were reports of explosions in the capital city of Harare.

Zimbabwe's military said President Robert Mugabe and his family are safe. According to the South African government, Mugabe was confined to his home.

Mugabe lost the favor of the country's military after firing the vice president, Emmerson Mnangagwa in early November — a move seen as an effort to help Mugabe's wife become his successor.

But Grace Mugabe is an unpopular candidate with military leaders. They want a president who was involved in the country's 1970s liberation war against minority-white rule — something Grace Mugabe was too young to do.

As the military claims to be arresting criminals causing "social and economic suffering," the Telegraph reports several Cabinet ministers the military arrested are part of a political faction that supports Grace Mugabe.

Mnangagwa fled to South Africa after being fired. But the Guardian reported Wednesday that Mnangagwa was returning to Zimbabwe.