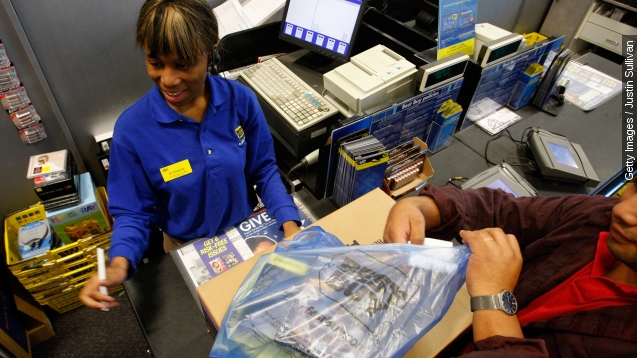 A study found black and Latino retail workers are paid less than whites, adding another facet to the national debate over raising the minimum wage.

When it comes to U.S. retail workers, a new study finds there's a significant wage gap.

According to public policy organization Demos and the NAACP, black and Latino workers are paid less than their white counterparts. (Video via Voice of America)

The study's authors write: "People of color are overrepresented in the positions with the lowest pay and the least stability and underrepresented in management positions. ... Black and Latino retail workers are significantly more likely than White workers to be employed part time when they want full-time hours."

This, according to the study, does nothing to help minority families economically as 17 percent of black and 13 percent of Latino retail workers live below the poverty line, compared to the average for the retail workforce at just 9 percent.

The study authors made a few recommendations to lessen the disparity, like reviewing discriminatory practices and increasing the minimum wage to $15 an hour.

That larger debate is already happening nationwide, from Los Angeles to Chicago to San Francisco and beyond. (Video via KABC)

Critics, however, say a pay increase could lead to increased prices for goods and fewer sales, which could force employers to lay off some workers.