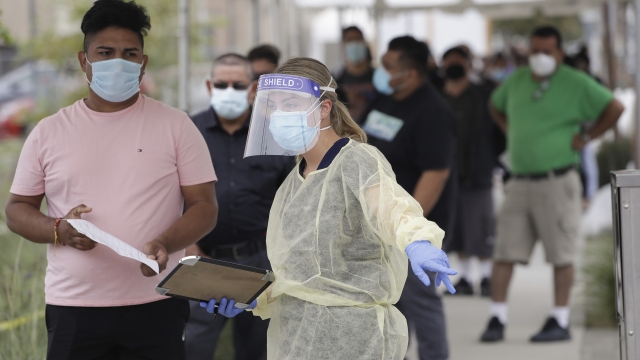 Only Missouri and Vermont saw improvement while experts warn of a new deadly wave of the virus combined with the flu in the coming months.

Nearly every state across the United States is experiencing a surge in COVID-19 cases and health experts say the surges will only get worse.

According to Johns Hopkins data, only two states — Missouri and Vermont ‚ are showing promising trends for COVID-19 infections...both saw a 10 percent improvement in the number of cases reported in the last week. Connecticut and Florida rose by 50 percent and reported cases in 27 other states, including Georgia, New Jersey and Texas have increased between 10 and 50 percent.

Over the weekend, the U.S. recorded the highest single day increase in cases since July and has been averaging more than 55,000 new reported cases a day, driven by surges in the Midwest and Mountain West.

Dr. Anthony Fauci said that the positivity rate — that's the percentage of tests that are turning up positive — is, in his words, “going in the wrong direction” in more than 30 states.

Experts warn that a new wave of the virus in the coming months – mixed with flu season – could prove extremely deadly for Americans and result in almost 2,300 daily deaths by mid-January.

The United States has surpassed 8.1 million confirmed cases of the virus and 219,000 deaths.