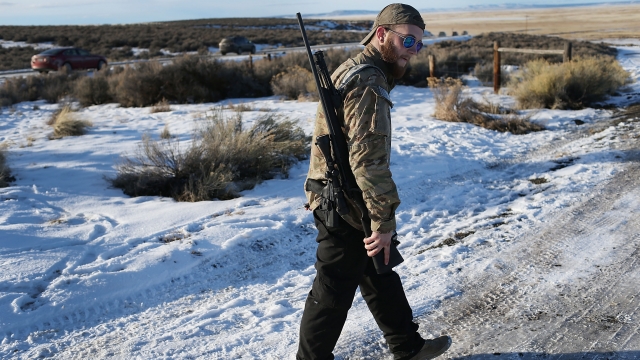 SMS
Report Warns Of Violent Threats, Assaults On Workers On Federal Lands
By Peter Hecht
By Peter Hecht
October 23, 2019
Some 360 threats or assaults were reported against employees on public lands from 2013 to 2017. The FBI investigated some cases as domestic terrorism.
SHOW TRANSCRIPT

Federal employees on public lands are being assaulted and threatened with violence, frequently from anti-government groups.

A new report from the The Government Accountability Office says federal workers overseeing park lands, wildlife preserves and other public lands were attacked or menaced 360 times from 2013-2017.

The FBI launched domestic terrorism investigations into threats against federal agencies, with the majority of cases involving suspects motivated by anti-government rhetoric.

The findings follow a 2014 government report that predicted "violent domestic extremist incidents" would accelerate. That's because agencies including the Department of the Interior, the Bureau of Land Management, National Park Service or U.S. Fish & Wildlife service are often targets of vitriol over land policies or the mere existence of public lands.

On one hand, the incidents reflect historic tensions over federal public lands restrictions on mining, logging, ranching or other uses.

On the other, many federal employees say there is reason to worry. The GAO report says gunshots have been fired over the heads of workers on public lands, and a Bureau of Land Management Employee was stabbed outside a federal building.

Andrew Suppiger, a National Federation of Federal Employees local president in California, says workers on public lands “have had to deal with an ever-increasing number of threats from radicalized elements of the public.”

Suppiger says there isn't a clear federal policy on how to deal with such threats. In fact, the GAO report recommends that federal agencies complete security plans to better protect public employees and facilities. Its findings will be discussed next week by the House Subcommittee on National Parks, Forests and Public Lands.

In July, President Trump appointed a new acting head of the BLM. His pick, conservative lawyer William Perry Pendley, had supported Cliven Bundy and authored books protesting environmental "tyranny" and a government "War on the West."

A year earlier, the president pardoned the two ranchers whose sentencing on arson charges led to the militia occupation of the Oregon wildlife refuge.