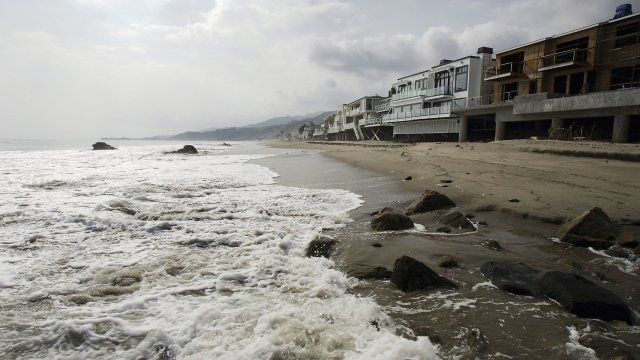 SMS
Report: 2.4M US Homes At Risk Of Chronic Flooding By End Of 2100
By Katherine Biek
By Katherine Biek
June 19, 2018
A new report estimates that more than half a million people in the U.S. may have to deal with their homes chronically flooding by the year 2045.
SHOW TRANSCRIPT

A new report estimates that more than half a million people in the U.S. may have to deal with their homes chronically flooding by the year 2045.

As Newsy previously reported, global sea levels are rising. And scientists estimate they're going to keep rising by as much as 6.6 feet by the end of the century.

So the Union of Concerned Scientists paired its previous research on areas already known to be at a high flood risk with data from Zillow, a real estate website, to estimate how many properties in the contiguous U.S. could be hit hard by the rising sea levels.

It determined that nearly 311,000 homes along U.S. coastlines are at risk of flooding 26 times a year by 2045. To put that in perspective — that means those properties could flood about once every other week.

And by the end of the century, the scientists say the number of homes flooding that persistently could grow to as many as 2.4 million, along with more than 100,000 business properties.

The report concluded by 2100, Florida, New Jersey and New York will have the most homes affected by rising sea levels.

The scientists noted these results were based off "a high sea level rise scenario" — meaning levels rising by more than 6 feet. Still, they said these estimates show how important it is to prepare for the negative economic impact rising sea levels will cause and how homeowners and communities will require support from local, state and federal government to prepare and take action.